Allow me to tell you a story about The Limping Duck.

It actually sounds like a name for a pub or a tavern of some sort. A cozy, if  eccentric hole in the wall known for attracting curious passersby while managing to land few regulars. I’m sensing a semi-nautical theme, perhaps antique style with a floral touch. In fact, if I ever open a bar (an unlikely scenario), that’s what I’ll call it – The Limping Duck. Alas, this is a tale about an actual limping duck.

During my study abroad trip to England in 2011, my classmates and I visited a beautiful site known as Kew Gardens; a botanical garden abundant in flowers and many other kinds of flora and fauna, which also features different kinds of glasshouses, conservatories, and other ornamental/historical buildings. In a previous blog post, I discussed my frolicking experiences in Kew Gardens. Needless to say, it is a brilliant and effective frolicking location, and it is well worth a visit. If you are a tourist, I definitely recommend checking it out.

Kew Gardens is also home to a lot of avian creatures- and if I’m remembering correctly, several kinds of waterfowl in particular. While scrolling back through my pictures, I spotted a heron or two, numerous geese, and what might have been a loon. But the most memorable of these creatures is the limping duck.

Our jaunt to Kew Gardens was a relaxed one; we were about to enter the Creative Writing portion of the course, but we were in a sort of in-between period. The study abroad trip was actually divided into two sessions, so students could either take one section of two classes (either the first session or second session, whichever they wanted) or they could take both sections for a total of four classes, and, essentially, a full semester of credit. I took both sessions, so while the students who elected to take only the first session were on their way home to the states and the second session students were arriving, we set off for Kew Gardens and a day of sight-seeing and picture-taking and, in my case, leaping across the grass with wild abandon.

A few of my friends and I encountered the limping duck on what I believe is the Sackler Crossing; a lovely bridge connecting two parts of the gardens. The bridge wasn’t super busy on this day, so it was easy to notice a tiny, feathered straggler as he hobbled his way across the planks. 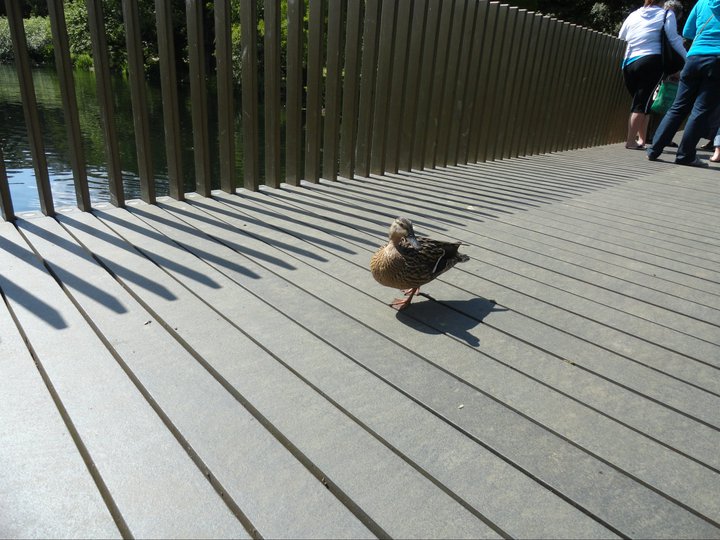 The duck was easy to notice because of the slight hiccup in his step, though most of the other garden-goers didn’t seem to give it much notice. Because the plights of injured/disabled animals make me emotional, I immediately commented on it to my friends, saying something to the effect of “OMGGGGG loooooook!” After stepping a bit closer, I realized that one of the duck’s feet was turned inward; possibly the result of injury, and the likely source of the limp. It was just plucking its way across the bridge, letting out some quacks, hobbling at a slow, but persistent pace.

My first reaction was to feel bad for the little duck. I mean…. ducks have enough to deal with as it is without having to limp their way through life. Inferiority complexes about geese. Having to scrounge for food amidst lake-weed and pond scum and beg for bread crumbs from sympathetic passersby. Bad feather days. Turf wars with the local loons. You know… typical duck problems.

The duck also reminded me of a goose I came across many years before. I know that sounds weird… most people are not personally acquainted with geese. Because geese are mean. Seriously. Have you ever heard a goose hiss? As someone who has been wrongfully pursued by an angry, spitting goose, it is an unpleasant experience and I do not recommend it. I think the only waterfowl meaner than geese are swans. Swans are jerks. Beautiful, snooty jerks.

There’s a restaurant in my area that has a sort of weird creek/river/pond behind it, and a nearby shop used to sell food/pellets (or something of that nature) to feed to the ducks and geese that hung out there. It’s unfortunately not a real “sylvan” area… so, because the geese chill in the area before flying off for the winter, there are “goose crossing” signs by the side of the road. I’ve nearly been late to work a couple of times waiting for the horde to honk their merry way across the street.

One goose remained for several seasons – a goose with a broken wing. Every time I saw it shuffling around, I felt bad for it. It couldn’t fly off with the others, and I’m not sure if someone took care of it while the rest of the flock left each winter, but it was around for quite a long time, with its crooked wing jutting out perpetually to the side. It couldn’t fly, but it persisted. Pretty sure it got hit by a car at some point, but it wasn’t the broken wing that did the goose in; just a lack of being able to look both ways. It didn’t let a handicap get it down and it lived on despite its wound.

My initial reaction to the limping duck was one of pity, as well – but it quickly turned to something else. Because while the duck’s handicap bit at my heart, the duck itself chugged along like nothing was wrong and quacked at passing folks as though to greet them and welcome them to the gardens. Eventually, it made its way down to the water and swam off beside some other ducks. The limp didn’t seem to affect its swimming as badly as it impacted its waddling.

Pity became admiration, because if a little limping duck can find a place in this world and make it work despite unfortunate circumstances, when things start to get rough or bleak, what excuse do I have?