When I was about seven or eight, I was obsessed with the musical CATS. Like, properly obsessed – I used to watch it every day after school, knew all the words to the songs (even though I didn’t know what half of them meant), and dreamed that I could be one of the characters onstage someday. Seeing as I can’t sing or dance, this was a lofty – and unreachable – ambition. But child Allie kept on dreaming. And my favorite cat was Skimbleshanks (the Railway cat), if you were wondering.

I loved it so much, my mom took me on a bus trip to NYC to see the show on Broadway. I was psyched. It felt like my dreams were coming true – what could possibly be better than seeing CATS on Broadway?

The day of the trip, the bus was full. Lots of dancin’ feline lovin’ folks, but I was easily the youngest by a significant margin, and definitely the only person whose age was still in the single digits. Also this was circa, like… 1999, for reference. This was the original Broadway run of CATS. To pass the time on the bus, the people who organized the trip arranged for us to play a game. A lottery-type game.

So, everyone who wanted to participate would put in $1 into a pool, and then everyone who put money in would write their name onto a slip of paper and put it into a bucket to be drawn. The last name drawn would win the entire pool. My mom added a dollar on my behalf, as well as for herself, so my entry into this contest was legit.

I think you can tell where this story is going.

One by one, the names were read out, occasionally accompanied by a groan or a sigh of disappointment. The slips of paper in the bucket began to dwindle. My mother’s name was read out, but I kept waiting for mine, until there were only two names left. Needless to say, I won, which upset many of the other passengers, but my mom made sure to shield me from disapproving glares and grumbles, so I wasn’t really cognizant of that.

I won $45, which, to a seven year old in the year of our lord 1999, might as well have been six figures. My mom kept it safe for me since we were going to see the show first, but we would have some shopping time afterward, and I had plans for that cash.

The show was incredible, of course – CATS really opened my eyes to the wonderful and expansive world of musical theater. I still can’t sing or dance, but I love watching other people do it. They also let the kids climb onstage and explore a bit during the intermission, because the show was a big hit with the younger crowd. But after loving the music and watching the VHS over, and over, and over again, it was a total dream come true for child Allie to see it live. I also get to be smug and brag about how I got to see it during the original, previously record-breaking Broadway run. And Skimbleshanks is still my favorite.

After the show, we got some pizza at a little hole-in-the-wall restaurant, and then… it was time for the next stop on our trip. A little place called FAO Schwarz. For those unfamiliar, it’s the toy store in the movie Big where Tom Hanks plays the giant floor piano. It’s not open any more, but it was insane, like a Toys-R-Us (R.I.P.) on steroids. And I was a child with $45 in my velcro wallet.

I’ll give my mom a lot of credit – she didn’t try to rein me in. I was a kid with whims, and I wasn’t about to put that money in the piggy bank to save for something like college. No, that didn’t even cross my mind. If there was anything at that point in my life that I loved as much as CATS… it was Pokemon.

I spent all the money – and I mean all – on Pokemon stuff. 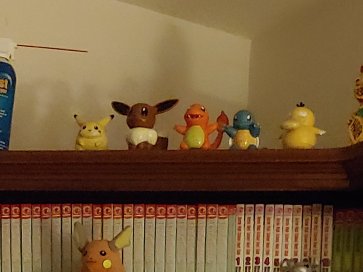 To be fair, twenty years later, I still have some of it. I have five talking figurines and a couple of plushies. I also bought a poster of the original 151 Pokemon to hang above my bed, because that’s the only Pokemon that existed at the time – it started at Bulbasaur and ended with Mew. The picture is of the figurines, which currently stand guard on my bookshelf, and sneaky peek of Raichu’s head. Squirtle also only speaks Japanese for reasons beyond my comprehension.

Was this the most responsible use of that money? Probably not. But I was young and $45 was a treat for me. It was like winning the lottery. If I won $45 now, I would probably put it toward bills. Either my car payment or my student loans. Because I’m 27 now, not 7. I can’t just toss money away on a whim.