On the previous installment of Writing Rewind, Heiwa got into trouble with his superiors for spacing off during training aboard the UNMEI. Will he be able to get it together in this upcoming chapter? Nope! But will something dramatic and life-changing happen? Yes! Let’s dive into Wings of Fate Chapter 6: The Girl. 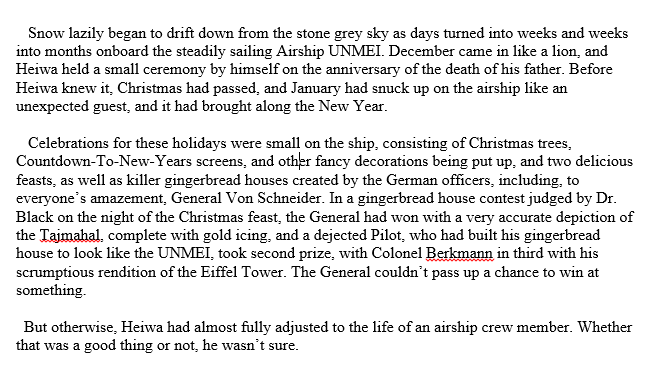 That first bit and the last bit aren’t awful, but that middle section…. dear GOD. The shame I currently feel is insurmountable.

More of the usual. Reworking and cutting out. And removing that entire atrocity in the middle. It is an entire paragraph of unnecessary dithering and a pitiful attempt at humor, and it must be DESTROYED.

There; the chapter is still being set up, but it isn’t bogged down by pointless blabbering. No gingerbread houses. I don’t even know why I put that in there in the first place, considering I hate gingerbread. 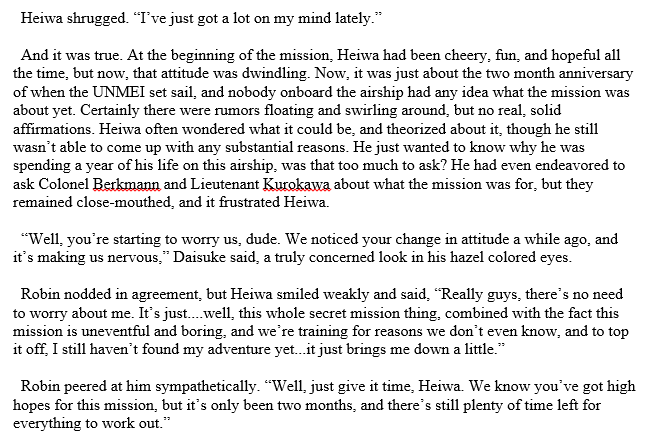 So, Heiwa has continued to get in trouble with his commanding officers because he can’t stop spacing off during training. Honestly, at this point, it’s a bit ridiculous that he can’t focus when the situation calls for him to pay attention. I actually agree with his superiors – he needs a good smack upside the head.

Lots to cut and lots to rework! This is still kind of a “set up” portion of the chapter, recapping the difficulties and frustrations Heiwa is having, but it still doesn’t need to be so long, since the real “meat” of the chapter hasn’t happened yet.

So here is the result…

There; the fat has been trimmed, and the passage still conveys Heiwa’s irritation and impatience, as well as the concern his friends have for him.

And now… the real adventure starts…

So, to set up this part, Heiwa is out “swabbing the deck” as a punishment for his behavior, when all of a sudden, something, or someone, falls out of the sky…

Alright! Things are getting real! Real ridiculous, that is…

Anyhow, this portion of the story is where Heiwa’s dream of “adventure” starts to come true, but this set up and description of the mysterious girl is still mega tedious and needs to be adjusted. 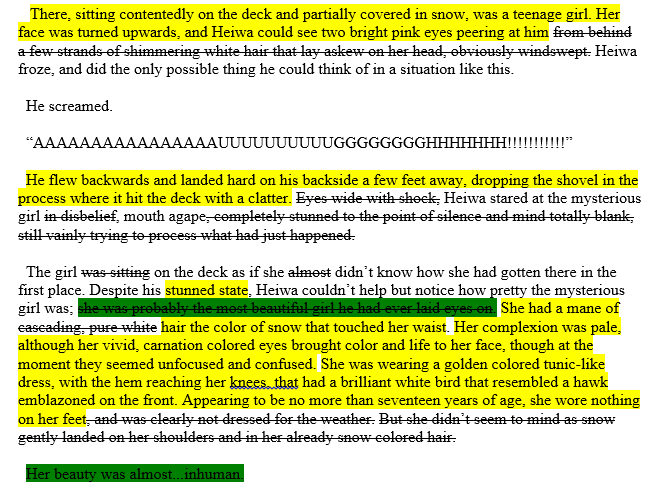 These character descriptions can be so much more succinct and far less clunky, nor do eye colors needs to be mentioned seventeen thousand times. It’s an introduction, not her life story.  So the usual rework/trim, plus a sentence needs to be moved to another point in the passage.

And here is the fixed version:

There; we’ve introduced our new character and got a physical description that’s a bit less wordy, so it doesn’t detract from the actual point of the chapter, which is the mystery of the girl, not what she looks like. 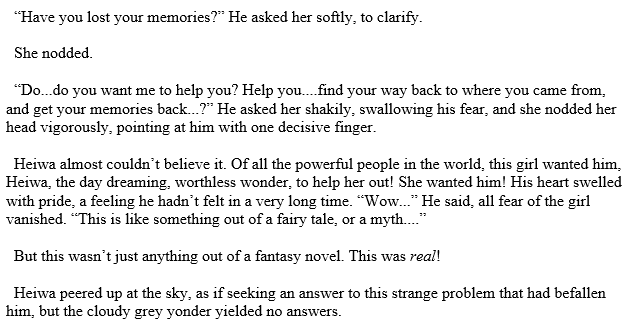 Okay; clearly this girl is going to be tied to Heiwa’s thirst for adventure, but I think the reader can put those pieces together without it being stated outright. 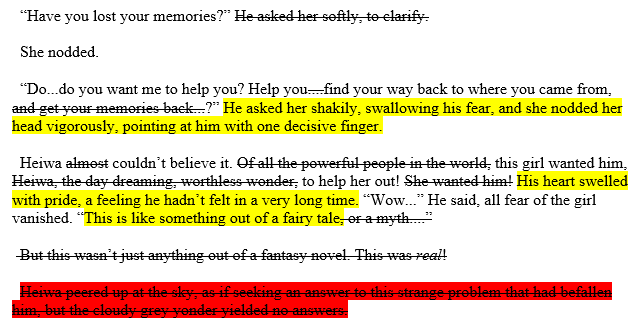 Okay, so I want to punch myself in the face for using the phrase “cloudy gray yonder” to describe the sky. That is a thousand different kinds of terrible.

Otherwise, it’s more of the same. Awkwardness needs to be addressed and needless words and sentences must face the axe.

There – the changes help to improve the flow of Heiwa and the girl’s first interaction with one another, and Heiwa’s not monologuing about fairytales and such, since the reader can understand that well enough by the circumstances. And “cloudy gray yonder” is GONE, NEVER TO RETURN!

For our next selection, Heiwa has named the girl “Shirotaka” and has decided to sneak her inside the UNMEI and keep her in his dorm with Daisuke! Because that’s a great idea.

I mean, Heiwa’s poor decision making skills aside, this portion could use some sprucing up. It’s not as bad as some previous segments, though, which I consider a tiny, near-minuscule victory.

Dare I say, since I only pinpointed a few major changes, this section shows minor signs of improvement? Nope, it’s definitely just a fluke. The usual issues with awkwardness and wordiness are still popping up and must be fixed.

There; for some reason, Daisuke agrees to Heiwa’s ridiculous plan in a less awkward and wordy fashion.

Lastly, after successfully smuggling food to their dorm for Shirotaka and Heiwa;s first night sleeping on the floor of his room, our heroes get a surprise the following morning…

Ah, yes… how could the boys forget about Inspection Day? Because the plot demanded them to, so we could fabricate some suspense!

Really not much to do with this portion either, at least compared to previous selections. The cringe is at a minimum! What a nice way to close out this post… but obviously, it’s not perfect and still needs some tweaking. What would one of my old passages be without some awkwardness to fix?

So, here’s the fixed version…

And there we have it! Chapter six is at a close, and a new character has been admitted to our ranks. Next time, we’ll meet some majors… both officers and problems, that is. Will our brave heroes be able to keep Shirotaka hidden during their inspection? Probably not! But will her presence on the UNMEI be a vital key to discovering the secrets of the mission? Who knows, but the next chapter is called, “A Mission Revealed,” so I’m thinking it’s probably a safe bet that Shirotaka is somehow involved.

ANNOUNCEMENT: I’m taking my YA novel I’m With You on a virtual book tour with RABT Book tours at the end of August! Info HERE.