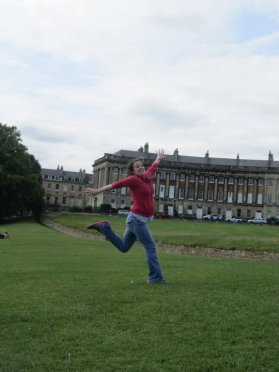 In the spring/summer of 2011, I spent two months traversing England with a group of about 20 other students and a rotating cast of four professors. I had my inhibitions about going at first – I had only just finished a rough first year of college, wasn’t sure I would be able to make friends on the trip, didn’t want to be stuck with people who didn’t like me for the whole session, had never left the east coast of the United States in my entire life, and was seriously considering transferring to a university closer to home for the next semester. But when I called my parents and told them about the trip, and all of the reasons why I thought I shouldn’t go, they told me that I would be pretty foolish not to, considering the perks, affordable cost, and potential for an excellent experience. A couple of older classmates also told me that they were going on the trip and would welcome me into their ranks. So, with much reluctance, I decided to take a risk and go. And it was probably the best decision of my entire academic/collegiate career.

I did a ton of stuff while I was in England. I got to see one of my favorite performers, Alfie Boe, as Jean Valjean in Les Miserables on the West End. I chased a cat through a graveyard (long story). I got to stand in the ocean on the beach at Brighton. I saw a play at the Globe Theater and my inner Shakespeare fangirl was squealing pretty much the entire time. My classmates and I wore Krispy Kreme sailor hats and carried a bunch of balloons while touring Oxford for reasons which, to this day, are unclear. I got to touch the Peter Pan statue in Kensington Garden. Several of us witnessed a car chase while on a Jack The Ripper Tour in one of the worst sections of London. We started a “Fresh Prince of Bel Air Theme Song” rap during a trip on the Tube, and several of the other passengers joined in. Several of us got lost on a country walk, but ended up making it to an adorable pub with some of the best food I’ve ever had. I got to live in a quaint flat with some great roommates, even though we had to survive our “swamp bathroom” for the entire two months. I got to take a weekend jaunt to Paris with some of my very best friends on the trip, and got to see Notre Dame, the Eiffel Tower, and parts of the Louvre. And, in a stroke of immense luck for all of us, it didn’t even rain a lot while we were there; rain was only a major issue about a total of seven days out of the entire two months. I packed rain boots and only had to wear them on the day we went to Portsmouth, and my feet were roasting by the end of that trip.

I have a lot of memories from England, luckily memorialized in photos and quotes. But there was one activity that I indulged in more than my other classmates; and that is frolicking. I’m not really sure what it was about the trip as a whole, but no matter where we were, if I saw an open stretch of grass, I determined that it was prime for the frolicking, and promptly spread my arms out wide and leapt my way across, sometimes taking more than one bound, just to make sure to reach my frolicking quota for each location. But not only that, I had to appoint official photographers to document all of my sick moves. Because let me tell you, I am a wicked frolicker. Like, people definitely stared at me whilst I pranced my way across several English landmarks and attractions, though they may have been more disturbed than impressed, but whatever.

There’s something inherently freeing about frolicking. The wind at your back, propelling you forward as you leap like a gazelle from one patch of grass to another. I frolicked across the grass at the Royal Crescent in Bath, where the attached photo is from. I frolicked through Kew Gardens – though, I assure you, no flowers were harmed in my ventures. I frolicked through the countryside, though Kensington Gardens, the water in the beach at Brighton, the deer-infested fields in Richmond, not far from where my classmates and I studied during the day. I was a frolicking machine.

And I think it all began with that first, tentative leap – the leap I took when I decided to throw caution to the wind and go on the England trip in the first place. It was, in my mind, an immense risk, because I am not a risk-taker by nature. If given two options, one being the play-it-safe route, and the other the high-risk/high-reward path, I am guaranteed to take the former every time. But after that first leap, the subsequent leaps got a lot easier. Less frightening, less intimidating. I stopped caring what people might think of me. I stopped noticing when people would frown or sneer or snicker at me for choosing to make myself look like a prancing, arm-flailing fool in front of both natives and tourists alike, because I was having fun. All it took was one little leap, and I found the courage to take several more – while I was in England, and also in the days and years that followed. Frolicking across the pond helped boost my confidence, and helped me turn that two month trip into one of the most memorable and influential experiences of my entire life, and thanks to that, I have a ton of memories – frolicking-related and otherwise – that I will always hold dear.

Now, five years later, some leaps still frighten me – but the idea of taking risks doesn’t paralyze me like it used to, and I look forward to frolicking away to other parts of the world, someday.