When my sister and her fiance announced that they planned to hold their wedding in Las Vegas, I was… apprehensive. My image of Vegas has always leaned in the “den of debauchery” direction, where I would be a fish out of water. I barely drink, I’ve never gambled, and I have no interest in strip clubs or anything of the sort. I’m not morally opposed to any of that, it just isn’t for me. But, since my sister graciously bestowed the title of Maid of Honor upon me, I had no choice but to go.

Just from walking along the strip each day I saw an Elvis impersonator on a motor scooter, was verbally accosted by a male stripper dressed (well….partially dressed) as a cowboy, was called a “naughty girl” by a female stripper in a risque police getup, politely rebuffed all folks attempting to hand out fliers, and saw numerous feathered and glittery showgirls strutting among the crowd. But Vegas really is what you make of it.

Though I didn’t indulge in much stereotypical “Vegas” behavior, I still had the time of my life.

First of all, dry heat is SOOO much better than the soupy, jungle-esque humidity that’s been assaulting south-central PA all summer. Yes, it’s the desert out in Nevada, and it is hot – but it’s not a gross, heavy heat like it is here. However, the brilliance of the sun pierced my 50spf sunscreen like scissors through paper, and I was very close to having noticeable tan-lines for the wedding ceremony. Fortunately, frequent slatherings and protective sunglasses kept the worst at bay. The lack of rain probably sucks long-term, though, so I doubt I’ll be moving west any time soon. 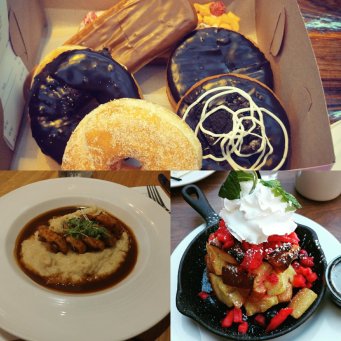 The food is great, if expensive… but if you’ve ever vacationed in a big, bustling tourist destination, that’s no surprise. The best meal I had was probably the shrimp and grits at Pub 1842, which is the restaurant of chef Michael Mina located in the MGM Grand. It was expensive, but it’s the one meal I had that I felt was 100% worth the high price tag. My other favorite meals were the french toast at PBR Rock Bar and Grill, which is very reasonably priced, and Pink Box Donuts, which are sinfully delicious. The poutine appetizer at Robert Irvine’s was also spectacular. I wish I’d made it to one of Gordon Ramsay’s restaurants, but I did get a photo op outside of Hell’s Kitchen. $56 for a Beef Wellington is a bit outside my price range, regardless.

The food might be pricey, but the cost of alcohol in Vegas is insane, so if you’re ever planning on partying it up out there, plan your budget accordingly. I can count the drinks I had over the course of the five days on one hand, and one was at an open bar, but it still hurt my wallet. For reference, I got three drinks at the pool one day (not all for me) and my bill was $60. At breakfast one morning, my meal was $8 and my drink was $13. I mean, I totally get it – it just made me glad I’m a lightweight. And the drinks I did get were fantastic.

Now, I want to get to the actual point of this post, so we’re going into bullet-point mode for a bit…

But the true highlight of my trip was getting to spend time with friends and family, some of whom we don’t get to see very often, and – of course – getting to see my older sister marry her soulmate… who is now her husband! I know when folks think of a Vegas wedding, they imagine a tacky chapel, a gaudy, rented dress and pale-colored suit, and a short ceremony officiated by an Elvis impersonator.

I mean, it could have been like that – but it wasn’t.

It was simple and lovely, well-thought out, full of joy and enthusiasm, and I’m so happy that they included me in their special day. The ceremony, out on the terrace at the Tropicana and put together by some very patient coordinators and planners, was beautiful. About 30 friends and family members made the trip to see the nuptials, which is impressive for a destination wedding. And the reception at Robert Irvine’s afterward was wonderful, though, while we were waiting for the room to be ready, the wedding party (except for me, who could not care less, and a few others) and guests were all crowded around the restaurant’s television watching the Penn State game, and I’m pretty sure everyone in the establishment knew that we were from PA after some very ardent reactions. It was rewarding to see my sister and her new husband enjoy their day and get to start their life together. And the cake was bomb.

I know they say what happens in Vegas, stays in Vegas… but I couldn’t resist writing a post about this trip because I’m so happy for my sister, and look forward to seeing her and her husband star this new chapter in their life.