You can know someone for decades, and still be surprised when they throw out seemingly random facts about themselves. Obscure little tidbits that don’t quite make it into “About Me” sections and convos because there is little opportunity to slide them in organically without sounding like you’re bragging. Well, I’m definitely not rife with such skills, but an example would be…

I have a history of turning bowling pins into art pieces for a competitive charity event. I have made a Jawa from Star Wars, and Groot from Guardians of the Galaxy. Here are a couple of pics. I also made a parrot once, but I can’t find any pictures of it. 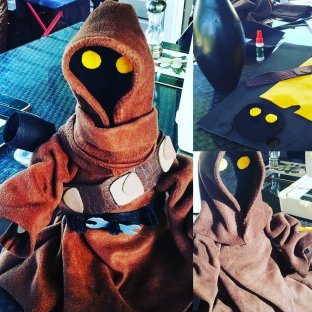 I’m proud of these, but I also don’t have much opportunity to mention it – though I can’t say I ever really look for a time to slip it into casual conversation. Sometimes, I even forget about it myself until I stumble across an old picture.

I also used to be on the global leaderboard for a facebook game called Night Balloons. I was obsessed with it for ages – now, I probably couldn’t play to save my life.

So, does anyone else have an unusual skill they’d like to brag about? Because I’d love to hear it!