Like all dignified cat owners, I love to give my cat, Reese, little ‘boops.’ Boops on the nose, boops on the head, etc. However, much like me, Reese also spurns the majority of affectionate gestures, so she typically acts incredibly affronted when I do this to her, and then ignores me for hours afterward.

Here is a pic of the demon, for reference. My adorable, antisocial tortoise-shell kitty. She’s about twelve now – but she’ll always be a “kitten” to me. She does love the occasional cuddle, but only on her terms. 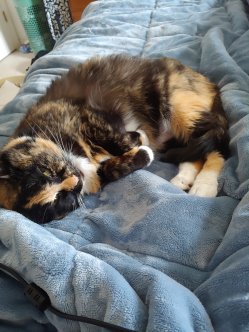 Recently, Reese has taken to laying behind the living room couch, which is a decent sized strip of carpet that leaves plenty of room for her to loll around, and she can see when people come and go from the house through the stair banister.

Recently, I came home from an outing – I believe from my viewing of Once Upon a Time in Hollywood – and Reese was waiting patiently behind the couch. She stuck her head through the bars of the banister and meowed eagerly at me, likely upset that I’d left her so long without food, not at the simple joy of seeing me return from being gone somewhere.

On a whim, I stuck my face toward her. Normally, she shies away from such gestures, but she tentatively stuck her head further toward me… and she booped my nose with her nose. Her little pink, velvet nose booped mine, like a tiny kiss.

I was stunned. She’s never done anything of the sort before, and she immediately scooted away from me afterward, so I almost didn’t believe it had happened. I filled her bowl with food, and she chowed down, the moment forgotten. But my heart was warmed… and even if it never happens again, I will always remember that boop. I will treasure it.

It truly is the little things, isn’t it?