As someone who was around back in the late nineties, when the Pokemon sensation swept the globe, I remember the craze when it was at full glory. Not only that, but I actively participated in it. I had a poster of the original 151 Pokemon over my bed, so I could look at them all every night before I went to sleep. I wore my favorite shirt, emblazoned with a Pikachu, until it was too ratty to wear. I’ve played every game since the Blue and Red era, and I forced my poor mother (love you, Mom!) to take me to see Pokemon: Mewtwo Strikes Back! back in 1999. Needless to say, she did not take me to see Pokemon The Movie 2000 – which I still contend is a great movie, but that’s beside the point… 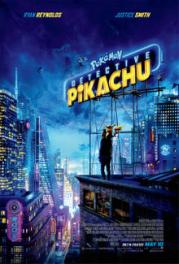 Detective Pikachu follows 21-year-old Tim Goodman (Smith) as he attempts to solve the circumstances behind his father’s disappearance with assistance from a caffeine-addicted, wisecracking, deerstalker-hat-wearing Pikachu. But the search for clues leads the unlikely duo into a mystery more intricate than either could have anticipated, and finding answers could save or condemn all of Ryme City.

Honestly, the biggest surprise in this film is that it’s good. And I don’t mean that it’s just a good Pokemon movie – it is a legitimately good movie overall. It works on a level that many other video-game or anime or cartoon adaptations have failed to achieve… because it doesn’t rely solely on nostalgia or fan-service to make a quick buck, nor does it neglect the source material so not to alienate new viewers. Instead, Detective Pikachu balances well-placed nods to the fans (both old and new) while presenting a film with believable characters and motivations, a story that is intriguing to follow, and it takes great care in bringing everyone’s favorite pocket monsters to life onscreen in a way that fans have been yearning for since 1999, or even earlier.

Despite the fact that Pikachu himself is CGI, the chemistry between the leads is superb, especially their banter and the evolution of their relationship as the story develops. Justice Smith is easy to root for, Pikachu/Reynolds offers steady doses of both heart and humor, Kathryn Newton (and her Psyduck) is a charming reporter eager for the truth, and both Ken Watanabe and Bill Nighy, known for their decidedly more “serious” work, give solid performances.

I haven’t played the Detective Pikachu game – I’ve stuck to the main games – so I knew basically nothing about the plot going into the film. The story flows well, and there are parts of it that are predictable and familiar – it is a “kids” movie, after all – but I was genuinely surprised and impressed by a couple of twists. As in, my jaw dropped and I said, “Oh my GOD” to my friend at one point. It’s not Sherlockian-level sleuthing taking place, but it’s also not Blue’s Clues level, if you catch my drift. The dialogue isn’t dumbed down, it’s sharp and won’t give adults a headache. And it feels like the people who made this film actually know Pokemon. As a longtime fan, it is awesome to see Charizard’s flamethrower come to life, Pidgeotto soaring in the air, Loudred beat-boxing in a club, and Magikarp flapping uselessly on the ground. The Pokemon aren’t crammed into the film to try and appease fans, thrown in wherever for throwback or nostalgia reasons; they have purpose, are immersed in the world, the effects are impressive, and their design does true justice to the originals. No, that’s not a dig at Sonic… …

Now, does this mean this film will be able to lure non-Pokemon fans into seats? Maybe not – though a few might make the venture based on the adorable titular character, voiced expertly and hilariously by Reynolds. However, it’s definitely the sort of film that won’t bore parents being dragged to the theater by their Poke-crazed kids. If this had come out when I was ten, my mom would have taken me to see the sequel. It has a cohesive narrative, a snappy script, and doesn’t delve so deeply into fan-service that the uninitiated can’t follow what’s going on. It’s one of the first films of this nature that feels like it can make the cross-medium jump without crashing and burning. It’s a solid mystery film for Pokefans young, old, and new, and though it hits familiar beats, it doesn’t feel tired or overdone, and might even generate interest for a new era of fans.

Sure, non-fans might not be able to pick out their favorite Pokemon puttering about in the background – I got treated to Gengar and Blastoise, two of my favorites, though I missed my beloved Alakazam – but that doesn’t diminish the quality of the film. References may fly over the heads of Poke-novices, but will warm the hearts of wannabe champions from Kanto to Unova. Let’s face it folks – we all live in a Pokemon world. And it terms of video-game film adaptations, Detective Pikachu might just be the greatest master of them all.