“Nations which go down fighting rise again, and those that surrender tamely are finished.” – Gary Oldman as Winston Churchill, Darkest Hour (2017)

Darkest Hour is an exploration into the life of British Prime Minister Winston Churchill (Oldman) during the tension-filled and controversial first few weeks of his tenure, as he takes office with the threat of Germany and the Axis Powers staring down Britain’s thought-impenetrable shores. As World War II rages on, Churchill faces opposition within his own country and outside of it. 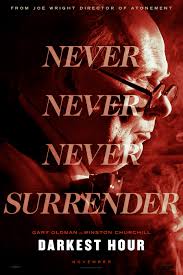 You cannot talk about how great this film is without first mentioning Gary Oldman’s performance as the notable British icon. He is the pounding heart of this film, providing the right amount of bluster, confidence, vulnerability, and cantankerousness, delivering Churchill’s famous speeches – most notably, his “Never surrender!” one – with aplomb. There are moments where his outbursts make you laugh, some where you shake your head in disbelief, and others where you might feel the urge to nod sagely in agreement. For his transformation, I’m fully expecting Gary Oldman to win Best Actor – and, truthfully, he 1000% deserves it. I’m stunned he hasn’t won an Oscar before – the man’s a chameleon and immensely talented. But, I’ll admit… he’s not my favorite to win; I’ve got one name ranked above him, though the race is very close. But if his name is read out on Oscar night, I’ll still be clapping ardently from my couch.

This film features brilliant performances – not just from Oldman, but the supporting cast as well – and is compelling from start to finish. It’s a visual treat with memorable dialogue and a score that has been unjustly underrated all awards season. I would have ranked this film above the other WWII-centered film nominated for Best Picture, but in reading up on both films since my initial viewings, Darkest Hour lost the edge for the historical inaccuracies. I understand the need for artistic liberties in historical films because no one can take history and transplant it directly onto the screen in 100% truth, but it’s a case-by-case basis; Imitation Game is one example of a movie that I soured on after reading up on the actual events, but I don’t mind the fictions in Saving Private Ryan one bit. Again, this is ALL personal preference. Playing with real events is tough, and Darkest Hour largely does a great job of showing both positives and negatives of such a critical time in history and it presents a mostly balanced narrative, but when the fiction outweighs history – the subway scene in this film is entirely fictional, for example – then my personal admiration starts to wane. If you’re interested in reading more on the fact vs. the fiction of this film, check out this article from the Slate: HERE!

That said, this is a gorgeous film to look at. I’m actually pulling for it to win the close race for Best Cinematography. There is a scene in this film where Churchill is alone in an elevator, surrounding by empty space, and it might be the most brilliant and symbolic sequence I’ve seen all year. Absolutely phenomenal. It’s an underdog in that contest, but I’d love to see Bruno Delbonnel take it. As far as the other awards go, Darkest Hour is a shoo-in for Makeup and Hairstyling, and rightfully so, considering Oldman’s physical transformation. His performance wouldn’t have been the same without that team turning him into Churchill. When it comes to Costume and Production Design, however, I doubt Darkest Hour will rise above the competition.

Though this film is not likely to take home the gold for Best Picture, Darkest Hour might be Oldman’s finest. If you’re a fan of war films, it’s worth seeing just for his performance and the cinematography alone.

For my full review of Darkest Hour from earlier this year, click HERE.