Whoo boy, we’re getting into the thick of things now! Last time, Heiwa was feeling discouraged about the mission until he met a mysterious girl on the deck of the UNMEI. Determined to help her, Heiwa has the bright idea to hide the girl in his room for the remainder of the mission, but inspection day is looming, which means the secret probably won’t last for long…

Poor, poor Heiwa. Naturally, his plans have all gone to shit. But they don’t need to fall apart in such…wordy fashion. Time to take out the shears! 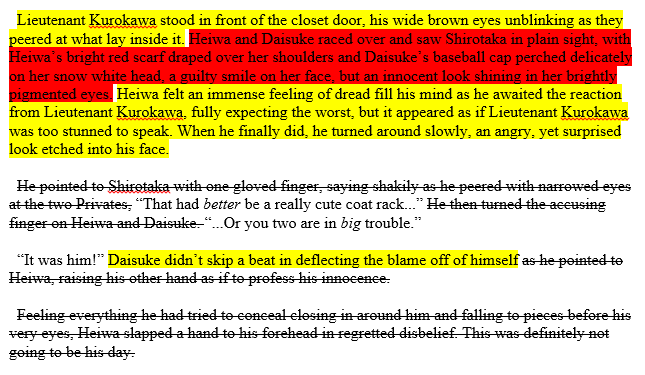 Good lord, that sentence about Shirotaka in the closet is unbearable. “Brightly pigmented eyes” might be the most cringe-worthy phrase I’ve encountered in this piece thus far, which is saying a lot. Also, a lot can be chopped off and some other things can be reworked to improve the flow.

Much slimmer, and it still gets the point across.

After the disastrous inspection, Shirotaka is whisked away and Heiwa gets sent to Sector One to meet with Major Tango, where he will presumably be assigned a punishment. But once he gets there, he encounters some trouble in the form of Major Leiter, who seems to be exactly as Daisuke described her. But when he asks for help, she doesn’t appear to be listening… 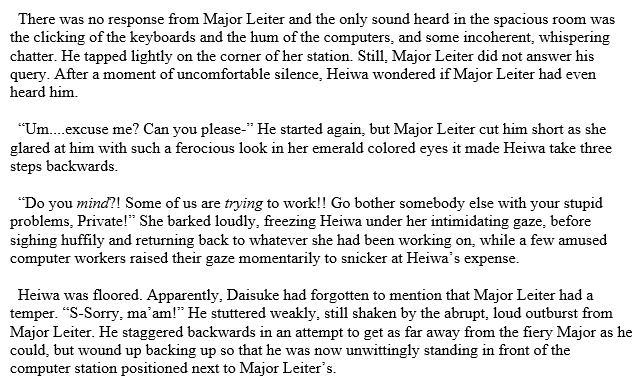 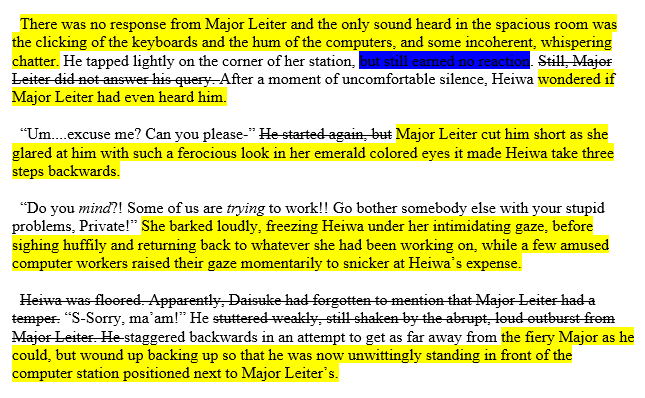 Major Leiter’s outburst and Heiwa’s shocked reaction don’t need to be so dense; it can be pared down and reworked to make it less clunky, while still giving insight into the type of person Major Leiter is.

There – much cleaner! The interaction flows better and doesn’t have so much needless fluff. Honestly, I think half of this entire story is fluff… but regardless, let’s move on…

After his encounter with Major Leiter, a young woman offers to help Heiwa, but Major Tango is late meeting him and he starts to grow worried. Which means it’s time to shoe-horn in a surprise introduction!

This is another interaction that doesn’t need to take freaking FOREVER TO GET THROUGH. I mean really. Really. Obviously, I intended the reveal of Tango’s identity to be a “super cool” moment, but when it drags on for ages, the moment loses some luster.

UGH, THE CHARACTER DESCRIPTIONS. Hair and eyes don’t need to be so DRAMATIC. Also, women as high-ranking officials shouldn’t be a shock anymore, so Heiwa’s reaction is a tad overblown, but I did write this as a high school freshman, so I’m giving myself some leniency here. 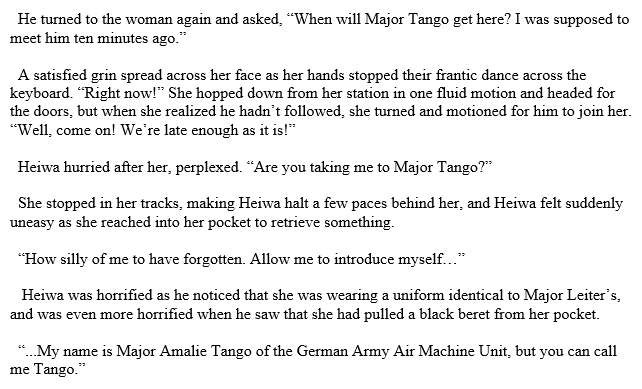 There; the Tango reveal takes less time and some of the cringiness is gone forever, never to be seen again, while other bits have been reduced and spruced.

So, Major Tango takes Heiwa to his next destination… and do I catch the whiff of a romance subplot?

WHY. DO. I. SPEND. SO. MUCH. TIME. DESCRIBING. MATTHIAS? WHYYYYYY????? *bangs head on desk* Seriously, he’s a cold dude – it’s obvious by now.  He’s basically the abominable snowman at this point, and we already have a pretty clear picture of his character, so it doesn’t need to be repeated OVER AND OVER AND OVER.

So, there’s a lot of description to be removed here. And some general rephrasing, as well.

So there we have it! Chapter 7 is a pretty dense one, so I’m halving it – this time, we get two new major characters, and next time, in Part 2, we finally find out what the mission of the UNMEI is! Over 50,000 words into it and we’re just now getting to the point. It’s been a bumpy ride, and trust me… it’s gonna get bumpier.

SIDENOTE: I’m taking my YA novel I’m With You on a virtual book tour later this month! Details HERE!