Let us continue our slog through my decade-old manuscript! Our unlikely hero Heiwa has bid goodbye to his family and is now aboard the UNMEI, still hoping for his chance of a lifetime! Who will his roommate be? What are the rest of the commanding officers like? Let’s not tarry… it’s time to resume our ADVENTURE!

We’re picking up right where we left off, with Heiwa venturing to his room assignment.

*eye twitches* So much needless detail and suspense for literally the smallest thing. Heiwa discovering that his roommate is Daisuke should not take half a page. 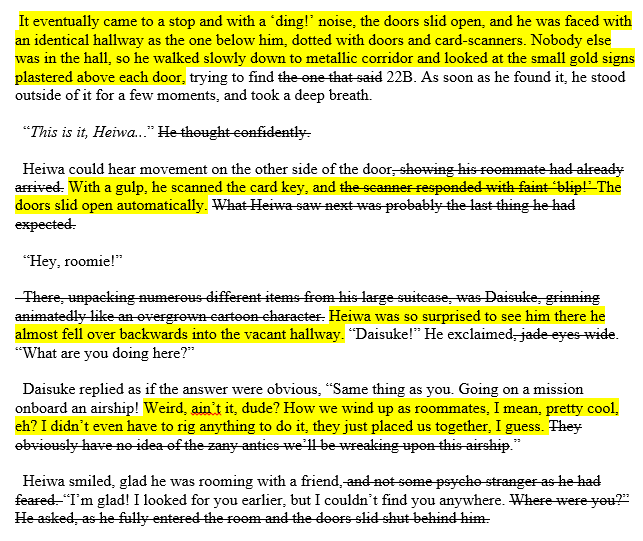 Ah, it’s axe time! My favorite time! Some of this dialogue also needs to be shaved down and reworked, as Heiwa and Daisuke don’t need to be saying the same thing a bajillion times. And that awful reference to Heiwa’s “jade eyes” is going in the trash heap.

Honestly, I could probably trim even more from the first paragraph, but this version still builds on Heiwa’s anxiety without going horrifically overboard. The dialogue is pared down, and cleaner. And let’s not mention the odds of Heiwa and Daisuke actually ending up as roommates… I took some liberties. Stranger things have happened.

Alright, alright… there is no way that Heiwa and Daisuke would be permitted to just sit on their beds as the airship is taking off. That can’t be appropriate safety regulations in any instance.

But, along with that, there’s a myriad of other things to change! GOD, WHAT FUN!

Trim, trim, trim, cut, cut cut, and tweak, tweak, tweak! There’s a lot of clunky wording to be reworked, and details to be changed.

Also, I’ve got a recurring issue with dialogue tags having a descriptive adverb , when a new word can just be used. So, “said excitedly” can become “crowed” or something similar, and it gets the same point across in a more effective way.

Ahhhhhh, much better! And boy howdy, I am going to get sick of changing the “V” in “von Schneider” to lower-case every single time it comes up, but it must be done. This is my penance.

So now, the safety regulations have been somewhat addressed, and the whole take-off process is condensed down into a more succinct passage.

For our next selection, let’s go to…

I’m not sure Sergeant Kahler got his point across well enough. He only said the same thing four times.

The main issue here is wordiness, per usual, so my proposed changes are…

Much better! Shorter, sweeter, and to the point… er. I guess. Anyway, it’s shorter; that’s the main point.

What a SHOCK!!!! There’s a female commanding officer!!!! God, so progressive. Anyhow, point is, the shock needs to be toned down, because it isn’t a huge deal in a futuristic scifi epic – it should be expected, or, at the very least, not a massive, jaw-dropping stunner. It shouldn’t even be a big surprise today, honestly.

Plus, lots of other things need to be amended. 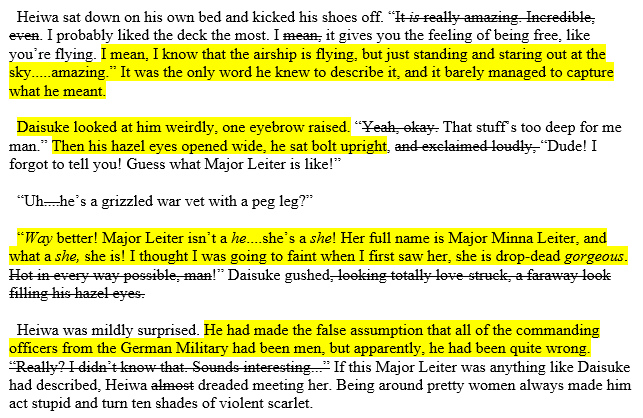 So much to fix… exhaustion setting in… we’re in the final stretch of this chapter, now. Must. Not. Give. Up.

Here are the changes in place!

Daisuke’s oohing and aahing is toned down a bit, the wordiness is rephrased, and some of the other dialogue is tweaked. Also, no red highlights this time! That doesn’t mean much, though… there’s still plenty of cringe here, just on a smaller scale.

Alright, so that wraps up chapter 4! Next time, we get to officially meet Colonel Berkmann, and Heiwa attempts to make a good first impression during training. Will Colonel Berkmann have some kind words for Heiwa? Probably not, but you never know! Stay tuned next time for Wings of Fate, Chapter 5: The Colonel’s Words.