On our last trip down memory (and cringe-worthy) lane, Heiwa, with some persuasion from the folks in his life, decided to go on the life-changing mission aboard the UNMEI. It took 10,000+ words for him to come to that conclusion. We are literally 30,000+ words into this story and just hit the official start of the main plot. That is 1/3 the length of my first published novel, for reference…

Not much recap to do, so let’s get started! 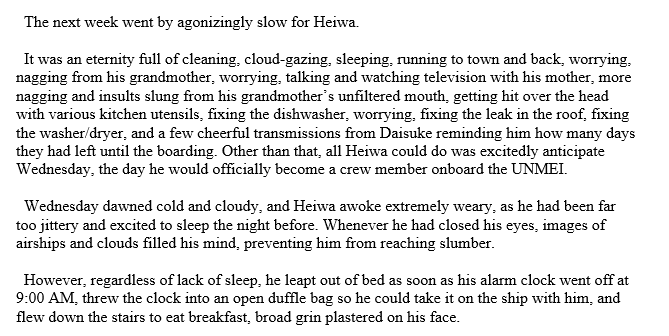 *pours fifth cup of coffee* Settle in, folks. It’s going to be a bumpy ride!

Per usual, this selection is bogged down by heaps of detail that are totally unnecessary and which add nothing to the story. So, it’s time to chop it up and glue it back together into something a bit more cohesive!

Here are the proposed changes… 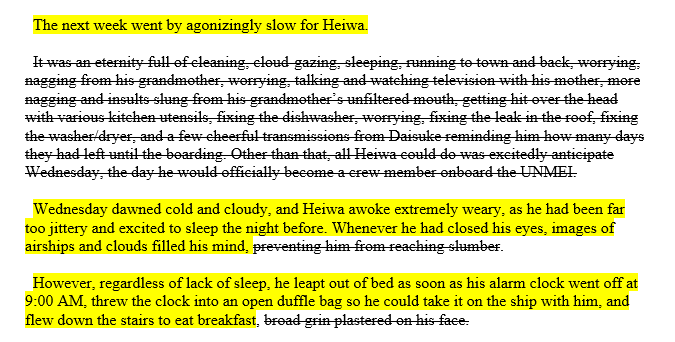 The start of a chapter should not be such a drag. It needs to accomplish the set up in a way that isn’t so slow and wordy. A lot of the detail in this isn’t needed at all; Heiwa’s week leading up to the mission isn’t important to the grand scheme, so that paragraph needs to go, and what is left needs to be reworked.

So, here are the results:

Much shorter, and yet, it conveys the same message. Heiwa is clearly excited about what is to come and we don’t have a useless recap of the non-important events leading up to the day of his departure. Who cares if he had to fix the roof before he leaves? IT DOESN’T F*CKING MATTER!!!!….Ahem. Sorry about that…

Next up, this lovely passage: 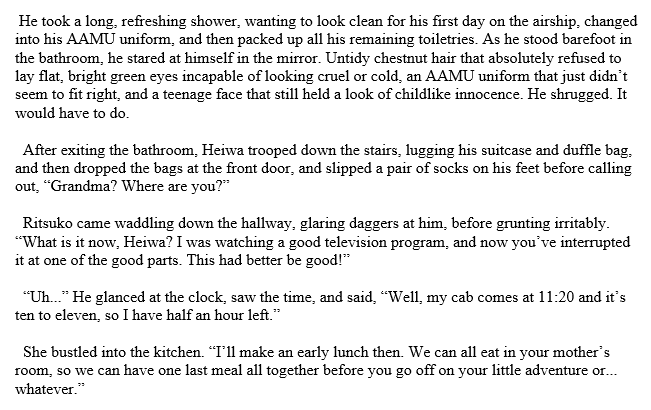 Ristsuko’s first dialogue segment features the word “good” three times. THREE TIMES. You know what that is? It’s NOT GOOD, that’s what it is!!!! I’m not against using “good” in terms of dialogue, but three times is excessive. 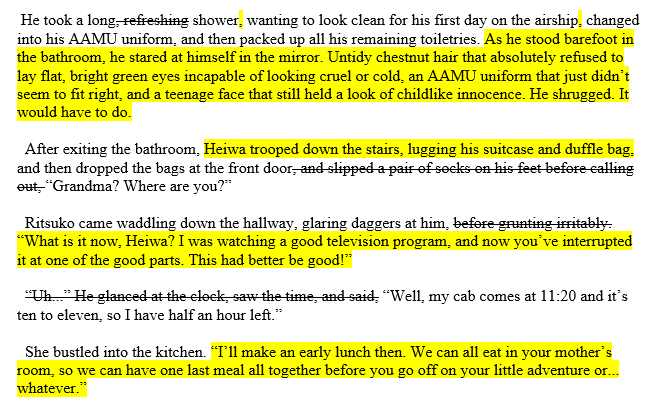 THREE TIMES. THREE. TIMES. I’m sorry, I can’t get over it…

Other than that, it’s the standard fare; needs to be trimmed and rearranged; slimmed and reworked. The dialogue is clunky (THREE TIMES!!!!!) and needs a bit of clarity, so the words will flow better.

Ah… the use of “good” is down to an acceptable level, and the dialogue has been re-worked so it sounds more natural. Heiwa’s description is also fixed, so, although it relies on the “looking in the mirror” cliche, it sounds a bit better.

For a bit of a summary of the bits I’ve skipped to get to the next section, Heiwa shares a tearful goodbye with his mother, catches a ride with Kato to the airship base, and is now awaiting orders, though he has yet to see Daisuke… 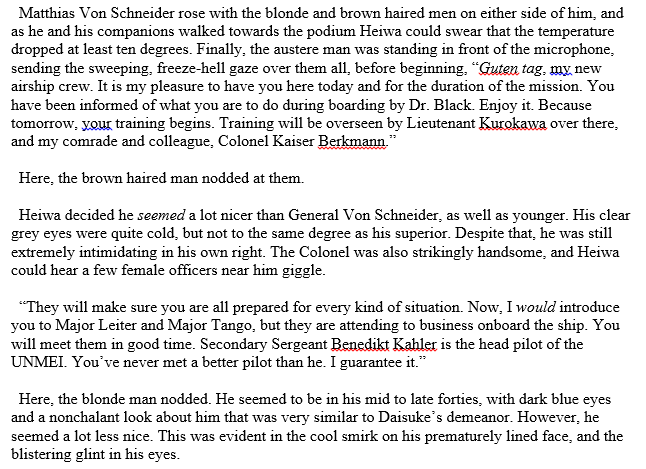 We get two new major/supporting faces in this chapter; Colonel Kaiser Berkmann and Sergeant Benedikt Kahler. Also, I apparently didn’t know that the “v” in “von Schneider” should not be capitalized. Hindsight is so fun, y’all; especially when a bit of googling could have saved me a lot of time, way back when.

My first scan results in this: 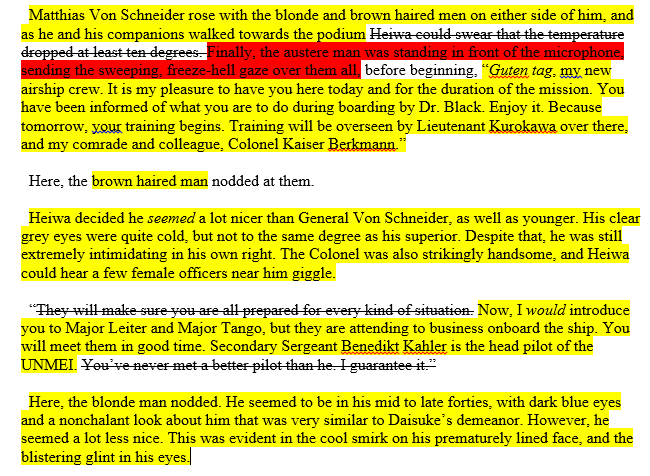 I genuinely believe that if I eliminate all references to Matthias being “cold” or “frigid” or “austere,” the word count could be under 100,000. Well… that might be a stretch. Let’s say 150,000. That “austere” reference is getting the axe, and fast.

Lots of yellow, here… and it is definitely necessary. This whole portion is tough to slog through and has no sense of flow, plus the character descriptions need to be tweaked. Also, the way General von Schneider speaks must be addressed, because I know that I was aiming for “intimidating” (or “cold,” if you will) but the way he speaks rings hollow in that regard, and doesn’t seem genuine or particularly “official.”

Much better! (There should be an “a” before “chiseled,” though. Just pretend it’s there…I don’t have the document with me to fix it at the moment…)

Exposition is still there, but it’s smoother and less clogged with unnecessary words/sentences, and the character descriptions are trimmed to the basics. The dialogue for General von Schneider has also been fixed, and he sounds a bit more “General-esque.”

Lastly, we move on to one heckuva doozy… 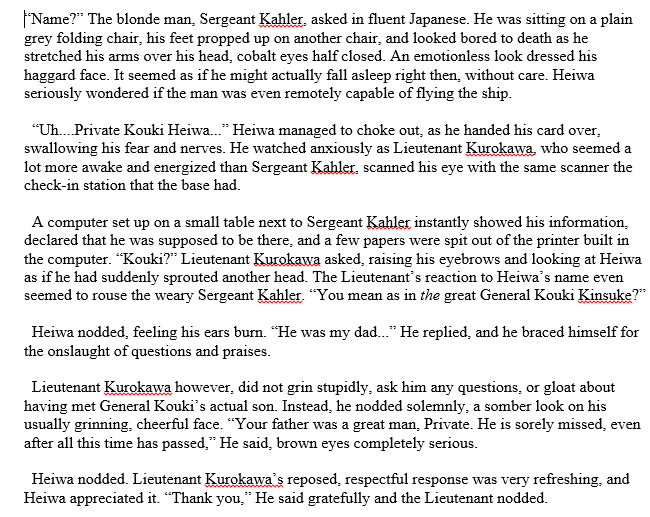 How will we ever fix this…this… MONSTROSITY?!?

After a long perusal, this is what I’ve got: 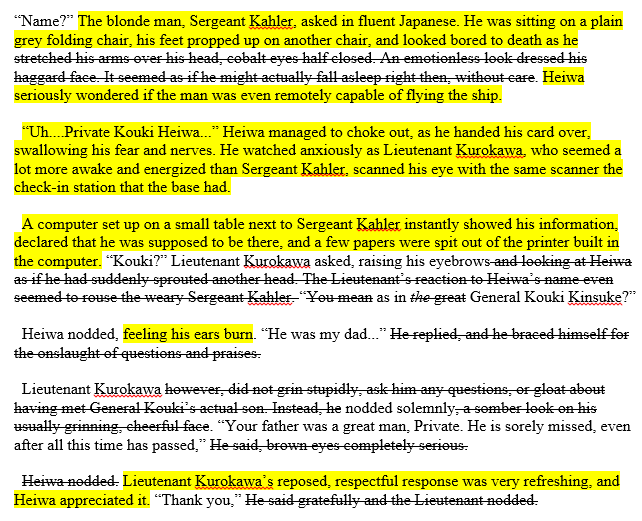 A few cuts here, and a few cuts there, and we might be able to save this bit! There’s a lot of description here, but sentences can be fused together to create better transitions, and some can be eliminated to make the whole thing move faster and smoother. Also, I believe Sergeant Kahler’s “nonchalance” can be summed up instead of described in multiple different ways.

That selection is just about halved and nothing of importance was lost, and the awkward descriptions have been fixed. The conversation flows better and isn’t stilted with superfluous fluff. Honestly, it’s amazing how much I am able to cut from this piece with ten years of practice and some schooling under my belt.

Alright, next time we have the second half of chapter 4! Who will Heiwa’s roommate be onboard the UNMEI? What will their training entail? What is the exact mission that Heiwa is now involved in? What are Majors Tango and Leiter like? Only one of those questions will be answered next time, but the rest will follow eventually! After all, what is a scifi/manga epic without excessive exposition and at least 7 chapters to establish the plot and main cast?

Stay tuned for the next installment!