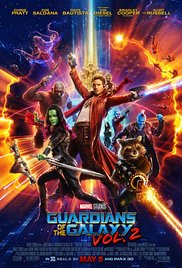 Back in the summer of 2014, I knew nothing about Guardians of the Galaxy, but when Marvel’s film adaptation rolled into theaters, my best friend and I decided to venture out to see it on opening night. I knew there was a raccoon involved, and I do love my nocturnal, trash-eating rodents, so I figured it would be worthy entertainment for a Thursday night.

However, I did not expect it to become my favorite installation in the MCU up to that point. The original Guardians is an action-packed, visually-engrossing space opera laden with laugh-out-loud humor and fantastic music, and 2017’s Guardians of the Galaxy vol. 2 is a worthy sequel and excellent addition to Marvel’s Cinematic Universe, even though it doesn’t quite achieve the same level of quirky charm of the first.

Guardians of the Galaxy vol. 2 follows the titular band of space misfits as they continue their travels through space and adapt to their new role as “heroes”, but after a mission goes awry, they must work to resolve their internal conflicts while also navigating various precarious situations, including the question of Star Lord’s parentage, the sisterly rivalry between Nebula and Gamora, and Baby Groot’s inability to understand even the most basic directions.

Naturally, with such a stacked cast, it’s easy for the more “supporting” characters to get shoved aside so the main cast can bask in the spotlight, but GotGv2 does a decent job of balancing the plot and the narrative focus between all of the characters. I think this contributes to the somewhat “nonlinear plot” of the film, as this film is far more character-driven than it is plot-driven, but that’s not necessarily a drawback; in fact, I think it’s the film’s strength. Each character seemed to get their own sizable piece of the action, and in most cases, the character arcs “overlap” to help ensure enough time is devoted to each person/creature. Gamora has to grapple with her dysfunctional relationship with Nebula, which also gives the viewer a better look into Nebula’s motivations. Drax strikes up an unusual (and hilarious) friendship with Mantis, and Rocket finds an unusual kinship with Peter’s old mentor/guardian Yondu (Michael Rooker), which also opens a window into Yondu’s past as a ravager and his history with Peter. Peter struggles to reconcile the dreams he once had about his real father with the reality of his actual father, Ego, in addition to dealing with an “unspoken thing” with Gamora. And Baby Groot is… well, he’s Baby Groot. Every moment he is onscreen is a moment to treasure.

But this focus on the characters only seems to add more of an emotional impact to the film, even if the result is a less “plot-driven” film than the previous one. I mean, while there’s a solid plot and all, the individual stories and plotlines are kind of loosely interwoven until the climax, where they all crash into one another; but instead of stretching the story too thin, I think it adds a unique sort of depth. After all, a film about a superhero team should give adequate screen time to each of the members, and this film does a great job of doing just that. It didn’t feel like anyone got left behind, and certain events over the course of the film packed more of an emotional punch because of the enhanced focus on the entire cast, not only the leads; this is especially apparent in the treatment of Yondu and Nebula, who get more of a layered portrayal this time around.

New additions to the cast include Pom Klementieff as the empath, Mantis, who expresses a genuine naivete and wide-eyed sweetness that balances out some of the “rougher” members of the team. Mantis contributes to a lot of big laughs throughout the film, especially through her interactions with Dave Bautista’s Drax the Destroyer. Kurt Russell oozes confidence and charisma as Star Lord’s father, Ego, and Elizabeth Debicki is “gold” in her appearance as High Priestess Ayesha of the Sovereign, though her screen time is limited. Also, Sly Stallone is in this for a hot second – didn’t know that until I saw the opening credits.

Much like with the first film, the music in this film is fitting for the plot and all around fantastic to listen to, and the effects are amazing, per usual – especially the design of Ego’s Planet. There’s plenty of action, and several sequences that are just an absolute blast to watch, especially in IMAX/3D. Plus, for a film/property that is generally more light-hearted in tone than other Marvel installments, GotGv2 isn’t afraid to land a roundhouse kick right to your feels in a couple of spots. Unlike Mantis, the film is beautiful – on the inside, and the outside.

Alas, with the good comes the bad; while the film features several legitimately hilarious moments (I’ll discuss a couple of them under the spoiler cut), some of the humor feels a bit forced and awkward, especially in the beginning – though obviously, this might differ for other folks depending on their sense of humor. It takes a bit of time for the film to find its groove, and a few jokes failed to hit the mark. However, Drax (along with his interaction with Mantis) is definitely the comedic heart of the film, along with the lovable Baby Groot. Everyone gets a few quips, and the film eventually finds a rhythm and sticks to it, despite a faltering start.

If you’re a fan of the first film, or just love a good, humorous jaunt through the distant reaches of the universe with a twig, a couple of aliens, a human/celestial, and a cybernetically-engineered trash panda, then prepare yourself to get hooked on a feelin’ (again) by Guardians of the Galaxy vol. 2.

SPOILERS BENEATH THE “READ MORE,” YOU HAVE BEEN WARNED.

You can tell (or, at least, I could tell) from his initial introduction that Ego was going to be the main villain, which detracted slightly from the “big reveal” moment – I just kept waiting for it to happen, so when it finally did, it was kind of an “oh, okay” sort of scene. I will say, though, that the intricacies of Ego’s plans and the cavern full of the bones of his children was fairly jarring. So, although Ego’s true nature wasn’t a surprise, the development of his character was handled relatively well, and Russell’s portrayal of the aptly-named, narcissistic god is superb. His performance likely saved the role from falling into the “worst MCU villains” category, along with Malekith and Whiplash. But the whole plot point with Ego telling Peter that he is the one who gave Peter’s mother a brain tumor was… weird? Still not entirely sure what the purpose was, except to give Peter a more “solid” or justified reason to actually kill Ego, or deepen the contrast between Yondu and Ego as a father figure in Peter’s life. But the fact that Ego was trying to essentially consume the universe is reason enough to take him out, so that point struck me as questionable.

Also, “I’M MARY POPPINS, Y’ALL” might go down as one of the funniest Marvel lines of all time. That was absolute gold. “I’m gonna make some weird shit” is a good one, too, as is Groot and the severed toe, Mantis’s attempt at a smile, the Pac-Man bit, David Hasselhoff, and just about everything that comes out of Drax’s mouth. Dave Bautista was born to play that role, because he totally kills it, yet again. I think the Guardians franchise may have set the benchmark for comedy in Marvel movies, and I don’t see any film breaking that any time soon.

Lastly, when Michelle Yeoh made her cameo appearance toward the end (as one of the Ravagers) I fangirled so hard. I would love to see her (and Ving Rhames!) in a future installment. Also, the post-credits scenes… ADAM WARLOCK, Y’ALL!!!! GET HYPE!!!!