My first car was a navy blue ’02 Subaru Legacy, purchased with 148,000 miles on it. I was 17 years old and absolutely terrified of driving on the highway (still am, for the record), but regardless, I was ready to (slowly) hit the road.

And boy, I loved that car. I named him Leon, because all cars must have names. I actually got the name “Leon” from the main character of Final Fantasy VIII, Squall Leonhart, my favorite all-time FF character. Leon the Legacy was his full name, but I usually called him by his stage name – Leyonce. This post shall be an ode to Leon. 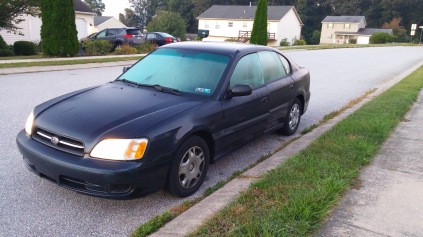 Now, I did not get my learner’s permit or license until well after most of my friends had already acquired wheels and the means to use them. This is largely because I was terrified of driving. When I was still learning how to drive, I took my mom’s Ford Escape around our neighborhood at 15mph, constantly asking, “Am I going too fast? AM I?” I also cried during my driver’s test because the instructor yelled at me, and I’m like, 43% sure he only passed me because he felt bad.  That should give you some idea of what sort of driver I was at the start of my driving career.

But soon, I had Leon.

I did not have him an exceptionally long time, but Leon got me through a lot, helped me overcome some of my driving inhibitions, and was with me during my first forays into the world of adulthood. I only got a car because I needed one to go to college in a state six hours away from home, since I didn’t live on campus and needed a way to get to class and my part-time job – and Leon was the best first car I could have ever asked for.

I believe I suffer from some sort of driving dyslexia, because, while I am not a good driver in general, it’s mostly because I am not good at all with directions. Two months ago I had to use my GPS to get home from the same doctor’s office I’ve been going to for like, eight years. I don’t know what it is, but when I’m behind the wheel, I am utterly useless at finding my way anywhere. It’s a miracle I even make it to work.

Leon is the first car I braved the highway with. I have fond memories of driving on the Mass Pike by myself for the first time, eschewing a panic attack, and having to climb out of the car to get my ticket at the station because I couldn’t reach it through the window. A 20 minute trip turned into 2 hours; and that’s not including the return journey, which included trauma I won’t go into. But I had Leon; my navy blue security blanket with all-wheel drive. I made it safely home, despite my struggles, thanks to him.

Late night heart-to-hearts with friends, parked at a curb in our tiny PA town. Driving up to the highest residential point in the area to look out on the city below. Venturing home from work after a snowstorm and skidding straight through a red light at a four-way intersection, screaming bloody murder all the while. My first road trip, from PA to MA, where I didn’t have to trade the wheel off until CT, when I was fighting to ward off sleep. Crossing state lines to play laser-tag (medieval style) for my 20th birthday, and jamming out to the Backstreet Boys on our way back to campus.

Leon’s demise came in 2014, after two head gasket replacements in a one year span. The first one made my wallet weep, but I understood why it was necessary, as Leon was 12 and things were starting to get worn out. After the repair was finished, I assumed all was well for the time being. So, I was driving around for a while (as in, for months) before I started to smell something burning every time I drove. A mechanic told me it was my oil pan, so I shelled out money for a “used” oil pan, then when that didn’t fix the problem, they took another, closer look. I was told that I needed another head gasket, and that I shouldn’t have been driving with my car in such a condition, because it could have broken down at any moment. Apparently, the first one wasn’t installed properly, or whatever – which made me lose a lot of confidence in said mechanic. Needless to say, I got another new head gasket. For free.

Sadly, though he seemed to be mostly okay after the second repair, this incident basically showed me that Leon was now costing more to maintain than he was worth. Every time I took him in for an inspection, there was something wrong with him – and it was never something that was easy or inexpensive to fix. I was forking over hundreds of dollars for a car that experienced constant issues, so, in the late summer of 2014, I decided that it was time to let Leon go and get a new car.

I found a used Nissan that I liked, and it was time to say goodbye to Leon. Before I traded him in, I took the time to clean everything out. The frisbees in my trunk, which I kept because you never know when you’ll need a frisbee. My emergency bag, complete with emergency granola bars and emergency change of clothes and emergency toothbrush. Countless poptart wrappers (it’s an addiction, don’t judge me). A surplus of CD’s, chronicling my taste in music over the years; from J-Pop to film scores to Swedish metal. Approximately 47 half-filled water bottles.

Once all my things were cleared out, I handed the keys to the dealer, and my trusty Subaru either went off to auction or was sold to someone new. It was difficult to say goodbye, but no matter what I’m driving, I’ll always have fond memories of Leon.