So, I’m going to be honest for a second. I’ve been in a bit of a slump when it comes to writing.

It happens. It’s not an unusual phenomenon for writers and other creative folk. Except this time, none of my go-to methods for sparking inspiration have worked. I sit down to write and… nothing happens. I plan out the time to write, and… nada. I saw a great movie, came home and… nope. I felt like I was trying to force myself, and any time I sat down at my laptop, my brain became mired in fog. The crap weather is certainly a contributing factor, because winter is terrible for my mood, but it seems the well of inspiration has frozen over, and I couldn’t make it thaw.

I needed a “eureka!” moment, to crack the ice and make my fingers feel like typing again, to make the wheels in my brain churn out some new, fresh ideas. Nothing seemed to work, until a package arrived at my doorstep on Tuesday – an item that I pre-ordered four years ago. The much awaited PS4 game known as Kingdom Hearts III, which I previously spoke about in this post. The end of an era had arrived by post, and I immediately popped it in and sat down to play as snow softly fell to the ground outside. 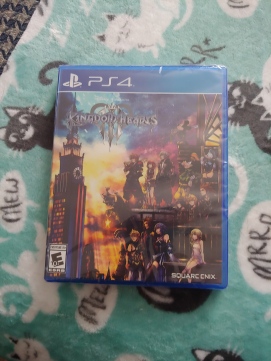 As soon as the opening cinematics played, I felt my chest swell with excitement, and the negative cloud in my brain evaporated. The music, the characters, the incredible graphics, the smooth game-play, the whimsy of Disney magic melded with the fantasy of Square Enix, all combined into one thrilling nostalgia bomb that overwhelmed my senses. Needless to say, I’ve logged 23 hours in 3 days. I’m well into the game, and absolutely loving it so far – which is big, considering I was very skeptical of the decision to include Pixar worlds. But, I must admit… KH is close to my heart, so it’s no surprise I was drawn in immediately.

And maybe that was all it took. I feel the itch to write again, and new ideas trickle through my head while I’m playing. Of course, I’ve been too busy plowing through Heartless, Nobodies, and Unversed to actually flesh those new ideas out, but, at the very least, I’ve been able to make note of them to come back to when the game is done. Which, at the rate I’m going, will be soon. But the gears are churning, and I don’t stare at my Word documents with dread anymore, so all I needed was a little help from Sora and co.

Anyone else ever had an “Aha!” or “Eureka!” moment after a long creative drought? I’d love to hear about other instances of reawakened inspiration from fellow writers, or other creative minds!

One thought on “Reawakened”