In the lead up to Infinity War this Thursday night, I thought I’d list my favorite films in the MCU thus far! Though, bear in mind, this is a list of my favorites, not what I consider to be the best.

5.) Ant-Man (2015)
I know this film doesn’t feature on many top Marvel film lists, but I thought this adventure, which feels like a fun side quest instead of a direct installment to the main, over-arcing narrative, was an absolute blast. Paul Rudd is the perfect choice for the role, combining humor and a sort of “every man” affability that made him both likable and relatable as a character (despite his prison record). It’s a superhero movie that doesn’t take itself too seriously, and sometimes, that’s exactly what’s needed in the midst of intergalactic wars or cities and planets in peril. I laugh every time I see the Thomas the Tank Engine scene, and for some reason, the size-changing hi-jinks don’t get old. I look forward to even more hilarity in the sequel, Ant-Man and the Wasp, dropping this summer.

4.) Black Panther (2018)
This film (coupled with the preceding Thor: Ragnarok) was the perfect installment in the MCU to set up Infinity War because it defies several of the common superhero tropes while still adhering to Marvel’s standards in quality and entertainment. Much like Ant-Man, this film is a palette cleanser, a nice break for those suffering from the “Marvel fatigue” as it helped rejuvenate a genre that sees more and more repetitive installments every year. T’Challa’s journey to assert himself as both an individual hero and a true leader to his people made me excited for superhero movies again, and it also has what is probably the most well-developed and exciting villain in the entire MCU. Plus, this film gave us Okoye and Shuri. Need I say more? 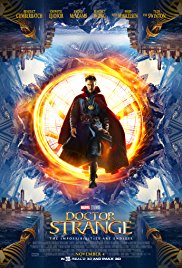 3.) Doctor Strange (2016)
Alright, alright…. maybe I just really enjoy Benedict Cumberbatch with a beard and a snarky attitude enough to see this film twice in IMAX 3D. But Doctor Strange is a unique character with a level of sarcasm and ego to rival Tony Stark, and his transition to the big screen was a refreshing trip into the world of illusion and different deimensions, as his story focuses more on the abilities of the mind and “magical” manipulation, which provide for absolutely stunning visual segments and complex, entertaining fight scenes. The final confrontation in this film also features a unique twist that is a nice change-up from the standard “hero must beat the big bad” recipe. And the cape is easily the best sidekick in the entire MCU (sorry, Falcon).

2.) Guardians of the Galaxy (2014)
I knew nothing about the titular characters going into this film, and came out of it blown away at how hilarious this motley crew of space adventurers could be. This film is a visual and auditory feast of bright colors, unique characters, and 80’s and 70’s jams coming together for one epic and laugh-out-loud romp across the galaxy. And while Groot is an absolute delight, and one scene in particular makes me tear up every single re-watch, Rocket Raccoon and his foul mouth will always be my favorite member of this ragtag squad. Plus, this film has the great distinction of being the only MCU film to feature a final confrontation that contains a dance-off. And that should be enough to convince any one to see it, if for some reason they live under a rock and haven’t watched this MCU gem yet.

1.) Captain America: The Winter Soldier (2014)
From the moment I saw Chris Evans in Captain America: the First Avenger back in 2011, his position as my favorite Avenger was sealed… and that conviction only grew stronger with the sequel, which I still consider to be one of the best all-around films in the whole MCU. Winter Soldier is equal parts political/espionage-laced thriller and action-packed superhero movie that blurs the line between right and wrong and good and bad, with an impeccable focus on character development and a lot of build up to future movies in this series, especially Civil War, which only narrowly missed this list. The Captain America-based storyline is (arguably) the most integral in the entire MCU, as his actions and decisions bear so much weight on the Avengers/S.H.I.E.L.D as a whole. For me, Steve Rogers/Captain America is the easiest character to feel attached to, to be inspired by, and his journey and development as an individual and as a member of the Avengers is the one I am most invested in, and his portrayal in Winter Soldier is him at his finest and truly coming into his own, learning that his shield cannot only be used to defend, but it must be a weapon too. Plus, this movie gave us Bucky/The Winter Soldier. Enough said.