“We rip out so much of ourselves to be cured of things faster than we should that we go bankrupt by the age of thirty and have less to offer each time we start with someone new. But to feel nothing so as not to feel anything … what a waste!” – Michael Stuhlbarg as Mr. Perlman, Call Me By Your Name (2017)

Call Me By Your Name follows 17-year-old Elio Perlman (Chalamet) and his evolving relationship with his father’s grad student assistant, Oliver (Hammer) over a summer in Northern Italy in the early 80’s. As their emotional and physical intimacy develops, Elio learns valuable lessons about sexuality, relationships, and the warring sweetness and grief that comes with love. 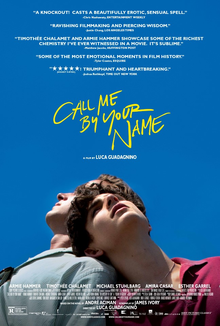 Of all 9 nominees for Best Picture at the Academy Awards this year, Luca Guadagnino’s coming-of-age drama about a sensual summer in Italy hit the hardest, spoke the loudest, and shone the brightest. It rocketed to the top of my personal list the moment I stepped out of the theater and has remained there ever since, though it wasn’t the last nominated film I saw. Upon reviewing all the nominees, Call Me By Your Name felt like the most well-rounded film; the music, the cinematography, the directing, the acting, the visuals, and the writing all combined for an utterly compelling cinematic experience, and I think it deserved more than the 4 nominations it received.

This film’s premise isn’t overly complicated – at the basest level, it’s a summer romance. And yet, it is so much more. Call Me By Your Name is an exploration into the complexities of human sexuality, a celebration of first love and savoring every sweet moment before an inevitable goodbye, and each small moment or movement – whether it be dancing in the streets,  yearning for watch-hands to tick faster, a long bicycle ride in the balmy heat of summer, or the music of a piano soaring through a room for an audience of one – bears significance. This film is a warm sweater on a rainy day, a dip in a pool beneath the scorching sun, a snapshot of a happy memory pinned to a cork board, and the sort of movie that invokes emotion without trying too hard to jerk at the heartstrings.

Gary Oldman is a juggernaut in the Best Actor category for his portrayal of Winston Churchill in Darkest Hour, and has been collecting hardware all season, but I am actually pulling for underdog Chalamet to pull out a win. His performance as Elio was breathtaking, even in moments of silence. He perfectly captured and expressed the feelings of being young, in love, and uncertain – my heart broke when he called his mother near the end of the film and asked, “Can you come get me?” with his back hunched and voice breaking. Honestly, I think he deserves the award for the last two minutes/credits sequence of the film alone. Even if he doesn’t win, a thousand gold stars to him. A THOUSAND, I SAY.

The chemistry and rapport between Hammer (who was unjustly snubbed for a Best Supporting nod, if you ask me) and Chalamet sold the romance 100%; their interactions felt genuine, their conversations natural, their hesitations understandable, and the evolution of their feelings for one another was an earnest, well-paced, and nicely developed journey, not just a mechanical “point A to point B to point C” narrative. It’s refreshing in a romance to see the less confident, more nerve-wracked person (Elio) being the one to initially make a move, contrasting with Oliver’s internal conflict over whether or not to act on his feelings due to the potential complications – a small subversion of genre expectations. The ups and downs of their relationship unfold with authenticity and passion and reveal both the positives and negatives of a consuming summer love and how it can make a heart soar, or sink, depending on the circumstances.

The rest of the cast is also excellent in their roles, especially Stuhlbarg as Mr. Perlman. His speech to Elio in the last third of the film is, in my opinion, the most poignant and powerful piece of writing (and one of the overall best acting feats) seen onscreen in all of 2017. If you glean nothing else from this film, that quote – the one I put in at the top of this post – is a message that should be taken to heart, and called upon when grief seems to usurp all other feelings.

For moments like that, and for several others, I’m predicting a Best Adapted Screenplay victory for James Ivory’s adaptation of Andre Aciman’s novel. When a screenwriter takes care of the characters and manages to add their own flair while remaining faithful and doing justice to the source material, even if they must make changes, it’s obvious that a lot of attention and care has gone into the effort. Ivory’s screenplay is superb; jam-packed with emotion and moments that linger in the mind and heart, and his words, combined with the excellent performances, made the characters feel alive. Even the smallest statements, the most subtle looks or phrases or movements, the softest sighs or simplest glances, have power in this film, and the writing is a huge part of that. I also think – like Martin McDonagh for Three Billboards – that Gudagnino was snubbed for a Best Director nom, but whatev… nothing to be done about it now.

I’m rooting for Sufjan Stevens to take home the Best Original Song award for his song “Mystery of Love,” but it’s probably going to get downed by The Greatest Showman‘s “This is Me,” or Coco‘s “Remember Me” – which is fine, because those songs are total jams. Regardless, I look forward to seeing Sufjan perform the song on Sunday night.

If Call Me By Your Name takes home the gold for Best Picture tomorrow night, I will actually scream and jump up and down in my living room, and I don’t even care if my neighbors get pissed. This film is a triumph – the kind of film you want to embrace and carry its warmth with you for as long as you can, or recall in moments of grief. It might be considered a long-shot in all categories but one, but this masterpiece deserves the highest honor on Oscar Night, and I’m really hoping that it emerges as the champion – but even if it doesn’t, it’s still my top film of 2017.

For my full review of Call Me By Your Name from earlier this year, click HERE!