Looking at the covers of the latter volumes triggered some memories for me, from back when this series was first released in English. Since Tokyo Mew Mew was the first manga I collected to completion and I started my collection as the series was being released, I would eagerly scan the manga shelves of my local Borders (good ol’ Borders! I MISS IT SO!) every few weeks, waiting for the new volume to come out. That’s definitely one of my first and fondest memories from my weeaboo years! 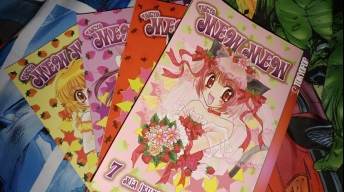 Following the set-up of volumes 1-3, volumes 4-7 wrap up our story with more much more action, drama, romance, some cake and pastries, and a refreshing dose of comedy that almost vanishes completely in favor of a more serious tone for the last 2 volumes as the plot reaches the climax. All in all, there are many twists and turns as this story draws to a close – secret identities are revealed, double secret identities are revealed, romances are secured, mew aquas are found, and jokes are made, often at Ichigo’s expense.

I do feel that the story needed a bit more time to breathe as it barreled toward a conclusion. The big Masaya/”Deep Blue” reveal takes place within the span of a single volume, so it feels a bit rushed, as it gets resolved in short order and the final fight – while the art is fantastic and the battle is well-depicted – feels short. I actually think this series could have benefited from a couple more volumes, which is not a sentiment I feel very often, especially with shojo manga. There’s not even that much filler in Tokyo Mew Mew, which is nice… just about every chapter has a purpose that is tied into the overall narrative and the major arcs of the characters/story, it still feels as though the resolution comes a little too quick. But ultimately, the conclusion is satisfying and just about all of the loose ends get wrapped up in a way that should please most readers.

Also, my hatred of Kish continues (and builds!) in the latter volumes, but I’ll chalk it up to underwhelming character development. He switches sides and suddenly becomes a “good guy” because he “loves” Ichigo, but it’s tough for me to take his motivations at face value because he barely knows her, the only times he ever interacted with her he was attacking her and her friends, and he is just so whiny I wanted to punt him across numerous panels and off the page. Also Tart is OBNOXIOUS. Pie was the only villain that I could stand, only because he has very limited panel time. However, our friendly heroines are all pleasant to follow, and though Ichigo makes some boneheaded decisions sometimes (she’s twelve, she gets some slack) it’s easy to root for the Mew Mews as they fight to protect and preserve the world. Keiichiro is an understated hero, and Ryou is not my fave, but getting a peek into his tragic backstory makes him easier to understand and empathize with. Could have done without the Alto bit, though. And Masaya’s arc was intriguing, though a deeper glimpse into his history might have been beneficial, considering he’s been the ultimate villain all along.

However, any manga that ends with a mock wedding between two 12-year-olds is a bit much for me on the saccharine-scale. It makes me feel like a huge killjoy to say it, but, while I find the Ichigo/Masaya romance cute and all, it’s sooooooo dramatic and there are so many love declarations and angsting that it starts to feel forced and disingenuous. Plus, they are children. I get that it’s manga and isn’t to be taken so seriously, I just have a tough time taking it seriously. Then again, I’ve aged out of the target demo for this series, and I’m sure I thought differently when I was younger. I will admit, though, that Masaya has the patience of a SAINT. Someday, I hope I can land a man who is totally fine with consistent lateness and flakiness and me randomly disappearing while out on dates.

If you’re looking for a cute magical-girl series that is significantly shorter than Sailor Moon or Fushigi Yugi, then Tokyo Mew Mew is a great outlet to satisfy your need for cute mottos, cute motifs, and cute characters… did I mention it’s cute? Overall, there’s enough sugar in this series to please even the fiercest sweet-tooths.