Let it be known, before I launch into this post, that I am not a K-pop aficionado. I do harbor a long-running deep love for J-Pop/J-Rock (Do As Infinity, L’arc-en-Ciel, Ayaka, Ayumi Hamasaki, Every Little Thing, Utada, FLOW, etc) and an appreciation for C-Pop and Mandopop (Jolin Tsai, Jam Hsiao, S.H.E., Mayday, Leehom Wang, etc), and while I enjoy K-Pop, my dedication level hovers somewhere above “knowing what Gangnam Style is” and below “creating K-Pop only blogs/twitters and knowing all the former and present members of Super Junior.” One might say I am a casual.

So a couple of months ago, I got a text from my best friend, which read: “Would you….. possibly hypothetically go with me to see a kpop group in dc?” I thought about it, and ultimately settled on, “Why not?” I may not be a mega-fan, but I figured it would be an interesting experience, regardless.

And it definitely was an experience. Now, bear in mind, the following observations are from someone who is not super-involved in the K-pop fandom, so please forgive any ignorance on my part. No offense is meant by anything said in the following blog post.

I might be a novice, but I am aware of the far-reaching scope of K-pop  – it’s basically a global phenomenon with a massive, dedicated fanbase. I know a handful of bands/artists, but I was more or less clueless about B.A.P. going into the concert. My friend actually made me a Google doc about the band/members to study beforehand, but needless to say, I didn’t retain much. However, no amount of research could have prepared me for what I was going to face at the Warner Theater in D.C on April 9th, 2017.

During the ride down to D.C, my friend (who is a K-pop expert) briefed me on what to expect, so I felt more or less equipped to handle things. However, more details trickled through over the course of the day, as she would casually mention, “Oh, by the way, there will be whistles,” and “Oh, just so you know, it’s going to start with a D.J.” and “There’s like, sort of a dress code…but don’t worry about it” – I half expected her to tell me the boys would land onstage after descending from the ceiling on trapezes. Outside the theater, we were given posters to wave during a particular number… and since I didn’t know any of the songs, my friend assured me she would alert me in advance. Once we entered the venue and got to our seats (in the balcony), she also mentioned, “It’s good we’re not in the orchestra seats, because it gets crazy down there,” and a girl sitting near us assured me, “Oh, it’ll get crazy up here too.”

And they were not wrong. All thoughts of being prepared were whisked away from me as the buzz began to build. Whistles were going off and fans were screaming well before the opening – and once the D.J. (A performer named D.Shoo, who was awesome!) actually began, the hype was ramped up to about a 1000%. Now, the Warner Theater is the sort of venue built for ballets and – so that sort of atmosphere, colliding with the passionate fervor of K-Pop fans and the colorful, flashing lights and screens, was a bit jarring at first. Folks were jumping up and down, whistles were blaring, everyone was standing and cheering, girls (and maybe some guys) were loudly proclaiming their love for certain members of the group, and the main act hadn’t even begun yet.

Naturally, when the group members – Yongguk, Daehyun, Jongup, Himchan, Youngjae, and Zelo (I only had to google, like, 2 of those – I’m getting better!) – actually emerged onstage and launched into their first number, the crowd totally lost it. I looked down into the orchestra and it was a literal sea of flailing arms, hands waving those little bunny monster wand things (Matokis, I think?) and screaming. A fan up in the balcony had some sort of light-up sign, as well. At some points, it got so loud that I feared I would lose my hearing for the following day, and my friend and I both had to work at 5AM the next morning, so that would have been less than ideal. Luckily, the ear-ringing ceased on the car ride home.

Even though I went into the experience mostly unprepared and unaware of what was about to ensue, I was completely blown away. From the moment the concert began, the crowd never lost their intensity- we were on our feet the entire time, and B.A.P. did a fantastic job keeping the energy level at it’s peak the entire night, even during “slower” numbers. It took me a little while to adjust to the ardent nature of the crowd, but I settled into a zone and found myself having an excellent time. It barely even felt like 2 hours, and even though my friend and I had been walking around D.C. most of the day beforehand, the exhaustion didn’t hit me until the car-ride home. Also, I can say, with 90% certainty, that I was the only person in the audience who didn’t know any of the words. The fans knew exactly when to join in with the next lyrics and didn’t even need any sort of cue – it was seriously awe-inspiring.

My favorite performances from the event were “Wake Me Up,” “Feel So Good,” “B.A.B.Y,” and “Spy” – at least, I’m pretty sure those are the titles. I had to google it. But I enjoyed all of it, and at no point or during any song did I think anything like, “Meh, this one’s just okay.” I also enjoyed the “Baby’s Lounge” segment, where the band members were charismatic and entertaining and got a window to interact with the crowd. I was surprised that they didn’t take more of a break between numbers – there were really only a couple of times where they stopped for a “costume change,” and they performed most of the songs back to back, which has to be exhausting. Regardless, they never lost their momentum and it kept the crowd enthused. I was jamming out to pretty much all of the songs – I’m not the type to really “let loose” and go crazy with the dancing and arm waving, but I did my share of “stand a sway” and moving to the rhythm. I let out a few “Wooo!”s of my own. The members each have their unique talents and voices, and they combine and complement one another in a way that makes a spectacular sound – plus their dancing/choreography is superb and was executed to perfection. “Feels So Good” and “B.A.B.Y,” were on repeat in my head for a couple days after – they are SO catchy. Not a single number or performance fell flat – as someone who knew pretty much nothing going in, I came away from it with a big grin on my face. 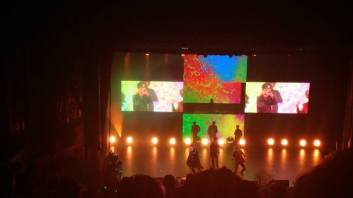 Now that the concert is over and I have had time to process, I can declare that, while I liked all of them, Himchan is my favorite… or I guess he would be my “bias?” I’m still not entirely clear on the terminology. Like, there’s something about “sons”? Or was it “children”? My friend tried to explain it to me but I was more or less like a well-meaning, yet clueless mom at her kid’s anime convention. The people around us in line and the girls sitting behind us were chattering on about their “biases” and all sorts of things and my friend could follow every word, but I was lost.

Despite my lack of knowledge, I also came away from the event with a new admiration for the dedication and persistence of the K-pop fandom. I can understand why some people think being that level of “fan” is obsessive/unhealthy, and it is a little overwhelming/off-putting at first to an “outsider” who is unfamiliar with the lingo and the customs, but honestly, as long as someone doesn’t let a passion or an avid interest affect their life in a negative manner, or allow it to completely consume their existence, or use it as a means to cause harm to someone else, then I don’t see the issue. Everybody’s got something they love – I’d be the same way at a Lord of the Rings event or something, and once I got used to the atmosphere, I no longer felt out of place. Even though I’m not at that level when it comes to K-Pop (and I likely never will be, though I do intend to broaden my range) I  can’t wait to add B.A.P.’s discography to my mp3 player so I can jam out while I’m at the gym. My interest in K-Pop might not be as off-the-charts as it is for some, but it certainly has been reignited. I wasn’t even upset that we didn’t get home until after midnight and I had to get up at 4 to go to work – the fatigue I felt the following day was worth it.

If my friend hadn’t invited and brought me along with her, I likely never would have attended a K-Pop concert of my own volition – so I’m grateful she included me. I consider the experience a valuable one, and can say, without a doubt, that it “feels so good” to have had the chance to witness B.A.P. perform live, and I might even venture out to more K-Pop shows in the future.