When I was a child, we truly lived in a Pokemon world. Pokemon was EVERYWHERE. One of the greatest Christmas presents I’ve ever received is the Pikachu-themed Gameboy Color with Pokemon Yellow Version. With the recent release of Pokemon Sun and Moon, I’ve been reflecting on my history with Pokemon quite a bit, from winning $90 on a bus trip to NYC when I was a kid and spending all of it on Pokemon merchandise at FAO Schwarz, to watching the latest Pokemon movies over Skype with my best friend while away at college.

Though I’ve fallen out of the fandom as far as the training cards and anime go, I’ve played the games from each generation; they never seem to lose their charm for me. But nothing can erase the glory of the first generation – the original 151 Pokemon. So, I thought, as a child of that era, I would compile a list of my favorite Pokemon from the first generation, and here they are!

1.) Gengar
Gengar is my boo, man. Sadly, I’ve not always been able to procure a Gengar for my team,

especially back in the early days, when trading wasn’t quite as easy as it is now. As in, back in the prehistoric era of trading via cable, not the wireless deal we’ve got these days. Gengar is equal parts adorable and terrifying, which is all I need in a Pokemon, and I think Ghost types are severely underrated. Plus, he’s PURPLE. With the right training, the Hypnosis/Dreameater combo can be lethal. And I totally buy the fan theory that Gengar is Clefable’s shadow. It’s not quite as credible as the “Cubone was originally intended to be a deceased Kangaskhan’s baby” theory, but it would be cool regardless.

2.) Alakazam
Alakazam is a staple for my team, if it’s possible to catch an Abra in-game. Getting it to

that phase is a pain (Abra only knows Teleport, so getting it to evolve to Kadabra can be a trial, then I always have to enlist someone to trade with to evolve Kadabra into Alakazam) but I’ve always found it beneficial to have a strong psychic type on my team. In my Diamond/Pearl days, I had a lvl 100 Alakazam and it was a total boss. Currently, in Moon, I have a Kadabra I’m waiting to evolve so I can get the brilliant spoon-bending fox-like psychic master back into my squad. AND it can learn Charge Beam! So if you find yourself bereft of an electric type on your team, Alakazam can fill that void. And it carries spoons, so if you find yourself with a bowl of soup and no utensil to eat it with, you’ll be set!

3.) Blastoise
I admit, I am biased toward water-type starters. I have almost always started with the 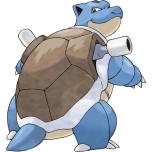 water starter on my initial run of a game, with the exception of Pokemon Moon, where I couldn’t resist Litten’s adorable charms… and I wasn’t a fan of Popplio, to be honest. But, as much as I loved Feraligatr, Samurott and Empoleon (Feraligatr is great, an Empoleon with Pokerus was my first lvl 100, and I think Samurott is awesome) Blastoise will always claim the top spot in my list of favorite starter evolutions. So many people love Charmander/Charizard, but Squirtle has always been my preference.  I mean, Blastoise is a massive tortoise with water cannons on his shoulders. What’s not to like?!?!

4.) Marowak
How about a creature in a legit skull helmet, with a bone it can use as a boomerang? I

absolutely love Marowak, but, to be honest, I usually don’t end up with one on my team. By the time I encounter a Cubone, I usually have a pretty good idea of where my team is going to go, and even if I catch one, it just ends up in the box. The whole plotline in the game with the sad baby Cubone and the vengeful Marowak ghost is absolutely heartbreaking, though. However, I do currently have an Alolan Marowak on my team in Moon, and I adore him, even though he is currently the weakest link on my squad. The Alolan version is black and has a flaming bone as a boomerang, so it’s even cooler than the normal version!

5.) Raichu
I was actually disappointed that you were forced to follow the anime’s plot in Pokemon 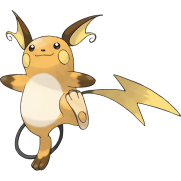 Yellow, and could not evolve your Pikachu into a Raichu. But ever since then, if it’s possible to catch a Pichu/Pikachu in game and acquire a thunderstone along the way, I always have a Raichu by the end of the game. Having an adorable electric mouse with a cool-looking tail has often come in handy on my travels, especially when Water-type gyms are involved. However, as much as I love Raichu, I usually end up keeping one on ‘reserve’ instead of on my main team. I currently have a Pikachu on my main team in Moon, and will soon have an Alolan Raichu, though I think I like the original a bit more than the new version.

6.) Ninetales
Ninetales is as beautiful as it is useful, and often serves as a valuable member of my squad.

Since I typically don’t select the Fire starters, I try and nab a Fire type during the game, so if Vulpix is able to be caught, that is often my first choice, unless it isn’t available until late in the game. Ninetales is just so graceful and elegant, and it can be a total boss in battle if trained appropriately. I had a lvl 100 Ninetales at one point and it was equal parts tough and gorgeous to look at – I used it in double battles with my lvl 100 Alakazam and they were quite the team to reckon with. I haven’t managed to snag an Alolan Vulpix in Moon yet, but Alolan Ninetales looks even prettier, so I look forward to getting one!

7.) Tauros
Although I find it to be one of the most badass of the original 151, Tauros is the only

Pokemon on this list that I’ve never taken with me to the Elite Four to grace the Hall of Fame. However, I always make sure to catch one if it’s possible, no matter how many hours (and I mean hours) I have to spend in the Safari Zone. Tauros just looks so intimidating and cool. Unfortunately for me, I’ve never been able to train one to actually be good and it usually just ends up dying in every battle, so I typically just catch one and leave it in the box. But if I could get a Pokemon to have in real life, Tauros would be one of my first picks, because I think it would be cool to roll up to work in the morning on the back of a Tauros. I could also take out my enemies with a well-placed charge!

8.) Vaporeon
Of all the Eeveelutions, my favorite is probably Espeon, but since this is a list of my

favorite original Pokemon, and Espeon wasn’t around until the second generation, I’m including my favorite from the first gen, Vaporeon. As far as I can remember, you can only get one Eevee in the original games, and  I’ve always chosen to evolve it into a Vaporeon, but if it’s possible to get/breed multiple Eevees, then I make Vaporeon my second selection (after Espeon). I also had a holographic Vaporeon Pokemon card back in the day, and I deeply regret that I gave it away.  I mean, Vaporeon’s got fins on its head AND tail – that’s pretty convenient. I imagine it would be very useful to take on a swim.

9.) Rhydon
Of all the Pokemon types in the original games, Rock and Ground are probably the ones I

used the least, and likely still use the least. There just aren’t as many Rock type Pokemon that appeal to me, so Brock and I probably wouldn’t get along very well. But if I had to finagle a Rock or Ground type, my first choice would be Rhydon. Well… technically, the first choice would be Rhyhorn, which, in my experience, is a complete pain in the rear to catch in the Safari Zone. But Rhydon is the bomb, and he’s got a drill on his snout, which I would imagine comes in pretty handy. I’m not terribly fond of the next evolutionary form, Rhyperior, but back in my day, Rhydon was the final form… and I like to pretend it still is.

10.) Pidgeot
As many aspiring trainers know, in several of the games, it is necessary to have a Flying 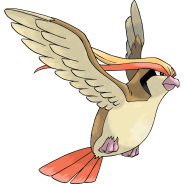 Pokemon, because at a certain point, you get HM02 (Fly) and get to fly back to all the places you’ve already visited. Due to this, I almost always make a bird Pokemon a staple of my team, and the original choice was always a Pidgeot. I mean, it’s not like it’s hard to catch… you practically drown in Pidgeys at the start of the early gen games, so you get your pick of the roost. I once picked a Spearow instead of a Pidgey, intending to bring a bit of variety to my squad, ended up with a Fearow, and it just wasn’t the same – it didn’t feel right. I picked a HootHoot in Gold version, as well, but Noctowl just couldn’t cut it either. Maybe because Pidgeot’s got such a regal mane of feathers, and I admire a good haircut on a Pokemon.

REMINDER:
There’s only a week left to enter the Goodreads Giveaway for a copy (out of five available copies) of my debut YA novel, I’m With You – here is the link to enter!

One thought on “Pokemon World”