“I have sent for some lobsters. I thought we could race them and then eat them.” – Olivia Colman as Queen Anne in The Favourite (2018)

Of all eight films nominated for Best Picture at the 91st Academy Awards, Yorgos Lanthimos’s semi-ridiculous period dramedy The Favourite impressed me the most. A thrilling combination of absurd comedy, stellar dialogue, and engaging, unique characters, The Favorite “re-imagines” authentic historical figures and events from the early 18th century, exploring the complex relationship between lifelong friends Queen Anne and Sarah Churchill and the unexpected arrival of a distant cousin who challenges Churchill’s place as the queen’s “favourite.” 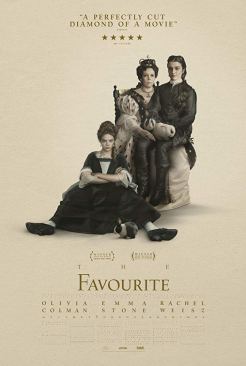 The Favourite also features a dramatic duck race and a group of men hurling oranges at a naked dude. So, that’s the type of film it is. Yorgos Lanthimos’s visionary directorial style and the wry black humor of Deborah Davis and Tony McNamara’s script is certainly not going to be everyone’s cup of tea – or, in this case, their cup of bowel-inflaming hot cocoa – but I found this enchantingly-bizarre film utterly riveting from start to finish. The dialogue in particular is a highlight, with historical speech patterns and trends interspersed with and influenced by current, more modern humor. It’s a jarring combination at first, but gives the film a comedic edge and a unique flair that sets it apart from the other nominees, especially because The Favourite also digs into the emotional, giving depth and motivation to the individual characters, and making their interactions all the more compelling, especially as the rivalry between Sarah and Abigail builds and tensions ignite to life-ruining proportions.

The film’s cast is led by a trio of prolific actresses – Olivia Colman as Queen Anne, Rachel Weisz as Sarah Churchill, Lady of Marlborough, and Emma Stone as Abigail Hill – and their performances are a roaring success, considering each earned an acting nomination. Regina King seems to be the one to beat in the Supporting Actress category for her turn in If Beale Street Could Talk, but my personal choice is Weisz. Her sharp performance as Lady Marlborough, rife with cutting wit, simmering rage, and festering envy mixed with careful aloofness to mask buried pain blazes against Stone’s desperate, calculated Abigail Hill who seeks to do whatever it takes to reclaim her lost status. Stone is excellent as well, in a role very unlike her usual fare, but I think cast-mate Weisz just edges her out.

Colman dominates the screen as the often-hysterical, but oddly-lovable Queen Anne. Her performance as the troubled monarch, who led a life “stalked by tragedy,” is defined by a scene where she sits on the cusp of a party, all dressed up in finery yet confined to a wheelchair, and watches as her guests and courtesans dance and engage without her as the music swells through the room. That scene alone made her my favorite for the Best Actress race, as well as the scene of her explaining her “children” to Abigail. Nicholas Hoult also deserves a shout-out for his performance as Harley, where he is nearly unrecognizable in a powdered wig and full makeup. His interactions with Weisz and Stone are a major comedic plus.

This film, like many fellow Best Picture nominees, is “based on true events,” and much of it cannot be proven as accurate. However, The Favourite does not present itself as a “blow-by-blow” representation of history, nor does it market itself as a faithful representation. I don’t even think it says “based on true events” on any of the posters or taglines I’ve seen for the film, so I doubt it’s part of the marketing strategy. The people depicted in the film are real, as are several of the events surrounding it, but it never tries to convince the audience that any of it is true. And that is the best kind of historical adaptation. One that tells its own narrative influenced by reality without carelessly inserting potential defamation or pushing any sort of underlying agenda, and it makes the audience more interested in what the “truth” really is. Despite his masterful vision, director Yorgos Lanthimos is a bit of a dark horse in the Oscar race, but when it comes to a film this weird, anything can happen.

On the surface – which does matter when it comes to film – The Favourite is an all-around outstanding production. It’s gorgeous to look at; beautifully shot. The set design, the costumes, the lighting… in a scene where Stone’s character is covered in mud, I felt as though I could smell the stinking sludge on her clothes, or the beef slab being slapped onto Queen Anne’s ailing leg, or the scent of smoke when Weisz is practicing her aim. The footsteps tapping through the halls as the characters move about create both a sense of foreboding and anticipation. And the music is great, including several famous baroque and classical composers and what I believe to be a snippet from one of my favorite Camille Saint-Saëns symphonies, also prominently featured in Babe (1995). You know – the talking pig movie. Anyway…

The Favourite has earned glowing praise from critics and audiences, but when it comes to the ultimate battle on Oscar night, it faces brutal competition. Roma certainly seems poised to win, which would be a much-deserved victory. But for this viewer, The Favourite has emerged as top film for the Best Picture race, and even if it does not take home that treasured honor, I am predicting it will go 4 for 10 on the night, though I won’t protest to a couple more.