Every avid reader has a favorite book or two… or seventy-six. But some of those notable or obscure titles can be life-changing. So, here’s a list of some of the books that have changed my life – not only as a reader, but as a person!

1.) Peter Pan by J.M. Barrie – Most folks probably think of the classic Disney movie when they hear the name ‘Peter Pan,’  but my first thought is always the book. This book was my first foray into a magical, multi-faceted fantasy world that explores joy and sorrow, light and shadow, happiness and fear. It captures both the wonder – and terror – of eternal childhood, of being terrified of losing something, and the bittersweet nature of fleeting youth against the inevitability of growing up. I realized, the first time reading this book, that the “never” in “Neverland” can be interpreted either as wondrous and whimsical, or grim and dour – or maybe a mix of both. I love a fairytale-esque story with a twist of something dark, and Peter Pan was the gateway book for me. The dual-nature of this book is encompassed in one of its most iconic lines, as said by the titular character himself: “To die would be an awfully big adventure.” 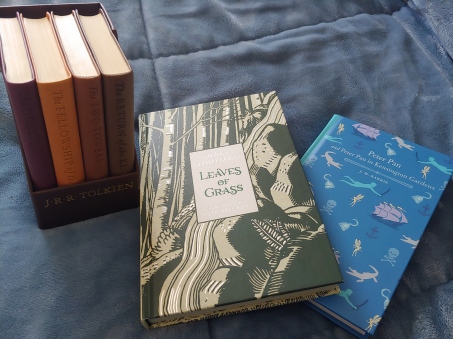 2.) Leaves of Grass by Walt Whitman – I’ve never been a poetry person… rather, I wasn’t until I took a Major Authors course on Walt Whitman my second year of college. I immediately connected with his poems, especially the titular “Leaves of Grass,” “O Captain! My Captain!,” and “Great are the Myths.” Whitman’s poetry, though written in the mid-late 1800’s, has a universality to it, a timeless quality that can be applied to scenarios and events throughout history and around the world, not only those that occurred in his lifetime.. His poems and the themes he presents are personal and profound, passionate and playful, perceptive and piercing. His poems make me think and feel, to apply his words to my own experiences, and I could pore over this book for hours pondering the meanings of his poems and imagining what his life was like. I recently bought a beautiful copy of this collection (pictured) and it’s got a place of honor on my shelf.

3.) The Jungle by Upton Sinclair – I’ve mentioned this one before, but I’m going more in-depth this time around. This is the first book I ever read (followed a few years later by Native Son by Richard Wright) that made me realize why people were drawn to communism/socialism/unions during the Industrial Revolution in America. It was jarring to read about what conditions were like for workers, especially immigrant workers, in the meatpacking industry in the early 20th century, as researched by muckraker author Sinclair. If you have a rosy view of what America was like during that time, building itself up from fields to cities and growing into the capital giant we are today, prepare to have your image shattered by The Jungle. I was assigned to read it for a class and put it off until the last minute, then plowed through the whole thing in one sitting because I was so engrossed. This was my first real wake-up call that American History wasn’t always blue skies and valiant victories… there are plenty of dark clouds and shameful secrets that, though hard to acknowledge, are important to our nation’s identity.

4.) Annie John by Jamaica Kincaid – I read this book for my senior seminar class in college, which focused on Caribbean literature. The entire class was an eye-opening experience, but I had to do a presentation on this novel, so I got to dive a bit deeper into it than the others we read. This book was my first time reading a coming-of-age novel about a girl from a background/life/place so completely different from my own. Growing up on Antigua is nothing like growing up in a rural town in Pennsylvania. And yet, it’s still possible to find universal threads woven into the unique, deftly-told narrative. At times, my heart swelled for Annie – and, at times, my heart shattered for her. Themes of depression, separation, mother/daughter relationships, growing up, and colonization are all expressed in a timeless and powerful fashion, centered around Annie, a complex and beautiful character. If you’ve never read a book like this, I HIGHLY recommend it.

5.) The Lord of the Rings by J.R.R. Tolkien – I mean… this book/series has probably changed every fantasy writer’s life, right? It’s THE pinnacle of high fantasy, and will never be topped. It’s just so, so… brilliant. Sure, the language and descriptions can be burdensome, at times… but it’s worth the journey, all the way from Bilbo’s first fateful meeting with Gollum in the bowels of the Misty Mountain to Galdalf’s epic “You cannot pass,” to Sam’s final line of “Well, I’m back,” as he greets his daughter and wife. LotR is the reason I want to write fantasy, and so, it has changed my life for the better.