In the spirit of the new GoT season, I’ll be posting random Game of Thrones based posts throughout the run of season 7.

This list only includes characters/actors who have not yet been billed with “starring” status, instead earning either “Guest” or “Recurring” status. Strangely enough, most of my favorite characters are classified as supporting, with the exception of The Hound and Jon.

WARNING: This post contains major spoilers for all 7 seasons of Game of Thrones and all 5 ASOIAF books plus some speculation.

All photo credit for this post goes to the Game of Thrones Wiki.

Beric Dondarrion – Richard Dormer
THE MAN HAS A FLAMING SWORD, WHAT’S NOT TO LIKE? In all seriousness, Beric’s fight scene with Sandor in season 3 is one of my all-time favorite moments on the show, and his resurrection afterwards gives me chills every time. Beric has had a pretty small role thus far, but whenever he’s onscreen, he delivers an engrossing performance, and ultimately, I think he’s a good fellow for Sandor to be around and even though Sandor would never admit it, I do think Beric (and Thoros) have already influenced his mentality. If not having Lady Stoneheart on the show means more Beric, I am 100% okay with it. His bromance with Thoros of Myr is also pretty fantastic, and as one of the leaders of the Brotherhood Without Banners, Beric wants to defend the realm from those who prey on the weak and bring justice to those who have evaded it, but is also aware of a “greater purpose” which has drawn him and his merry band northward. Of course, that awareness likely means he’s going to meet his demise (for real this time) but if he does, I hope he goes out swinging that flaming sword and taking a chunk of the army of the dead down with him. Also, Dormer’s voice is amazing. I could listen to him narrate books or ramble on about literally anything for days.

Jaqen H’ghar – Tom Wlaschiha
I’m not ranking him on this list just because Tom Wlaschiha is a fine specimen of a man, but also because he effectively conveyed two different GoT characters, taking on both the eloquent, yet enigmatic Jaqen H’ghar in season 2 and the more somber, unnamed Faceless Man in seasons 5 and 6 (at least, I don’t think they’re the same person, just the same “face.”) However, it’s his initial appearance as the deadly smooth assassin that I found more engaging. His peculiar, but alluring style of speech (Lorathi), suave smirk, and his interactions with Arya make him a major highlight of season 2. Plus, when you think about it, Jaqen and his mysterious ways is the one who sets Arya on the path toward vengeance… however, we have yet to see if that was ultimately a good path for her to take. 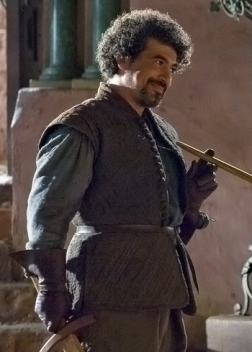 Syrio Forel – Miltos Yeromelou
Syrio has very little screen time and has not been seen since season 1 (I’m not 100% convinced he’s dead in the books, but in the show it seems more likely) but his impact was immense, and he had significant influence on Arya that persists long after his final scene. Yeromelou didn’t fit the physical description of Syrio from the novels, but he totally owned the role and delivered one of the more meaningful performances in season 1, especially since his mentoring continued to affect Arya well into the series. He was a legend with a sword and a stick, and planted the seeds for Arya’s desire to be a “water dancer.” I attempt to use “Not today,” in my everyday vernacular, now.

The Waif – Faye Marsay
The Waif might not be a “good guy” and clearly bears a grudge against Arya, but even though she’s a somewhat “gray” character, I found Marsay’s portrayal pretty fascinating and I enjoyed her as part of Arya’s story-line, especially since her inclusion gave Arya someone to butt heads with besides Faceless Jesus. In particular, her Terminator-style running and total badassery with the stick was impressive to watch, as was her total mercilessness when it came to carrying out orders or tasks. One standout scene that comes to mind is when she is teaching Arya how to play the “Game of Faces,” and, after she spins her pretty convincing sob story, she demands, “Was that the truth, or was it a lie?” The Waif is mysterious, and also kind of terrifying – and her last climactic showdown with Arya was a fitting culmination for Arya’s journey in Braavos.

Oberyn Martell – Pedro Pascal
I’ve mentioned it in my “Best Episodes” post, but Oberyn’s speech in Mockingbird is one of my favorite monologues in the entire series. Pascal absolutely killed it as Oberyn and the character was a major highlight of season 4, and he basically set the bar for the Dorne portion of the story, which, unfortunately, has floundered a bit ever since (I do like Ellaria, and I don’t think the Sand Snakes are/were that terrible) but I still carry fond memories of his portrayal, and always look forward to re-watching season 4 and witnessing Oberyn’s verbal ownage of Tywin and Cersei, his pledge to help Tyrion and avenge the loss of his sister, and even his final, gruesome moments… admittedly, I always have to look away before it gets too gross. He was a nice contrasting perspective and brought a unique presence to a series full of so much doom and gloom, and though he’s been gone nearly 3 seasons now, he is still sorely missed.

Olenna Tyrell – Diana Rigg
The aptly named “Queen of Thorns” and her scathing, witty banter are also worthy of the moniker “Queen of Sick Burns.” From her very first appearance in season 3, Olenna Tyrell steals just about every scene she’s in with her hilarious insults (mostly to Cersei) and shrewd behind-the-scenes scheming, steamrolling over her opposition with the sheer strength of her wit, wisdom, and killer verbal smack-downs. I’d love to quote a favorite line from her but there are simply TOO MANY, but her interactions with Varys, Tywin, and Sersei are certainly highlights. She also literally has a hand in committing regicide, and yet, she shows such fierce devotion to her family (well… except maybe Mace) I’d still love to have her as a grandma. I am so TERRIFIED that she is going to die this season because I don’t think I will be able to handle it, but if she does… I hope she goes out in “thorny” fashion and takes some folks down with her.

Hodor – Kristian Nairn
I think Hodor’s character is a sure example of “You don’t know what you’ve got until it’s gone,” because I, like many other fans, was unraveled by his heartbreaking demise in the middle of season 6. For 5 seasons (6 technically, but his story-line was absent from season 5) Hodor has been Bran’s unfailing and uncomplaining companion, carrying Bran north toward his true purpose. He only ever had one line, but never said “Hodor” the same way twice – and Nairn was the absolute perfect actor for the role. He really put the “support” in “supporting character.” The “Hold the door!” revelation will go down as one of the saddest, and most heart-rending moments on the entire show, and even among all the major character deaths, Hodor’s was absolutely devastating; proof of how big of an impact his character had despite a relatively small role.

Maester Aemon – Peter Vaughan
Though “Baelor” is a largely heartbreaking episode for a different reason altogether, the “Love vs Duty” scene between Jon and Maester Aemon where Aemon reveals his Targaryen heritage and how it felt to essentially lose his entire family is one of my favorite interactions across the entire series. Vaughan didn’t have a major role but he had a lasting impact, as he offered guidance to both Sam and Jon (and the Night’s Watch in general) that has had a profound effect on their character development. He had faith that Jon could be a great Lord Commander, casting the tie-breaking vote to put Jon in the position, and helped spark Sam’s interest in becoming a Maester. I got mega choked-up when Aemon died, uttering his heartbreaking last words of, “Egg… I dreamed that I was old!” and in his later seasons, I especially adored his interactions with Sams both big and little. It’s sad that his character never got to meet Dany, or know the truth about Jon’s heritage. And R.I.P. to Peter Vaughan – a marvelous actor who brought many great characters to life over his career, including Aemon Targaryen.

Barristan Selmy – Ian McElhinney
Barristan Selmy’s dramatic (and wrongful) expulsion from the Kingsguard in season 1 is one of the earliest and most memorable badass moments from the show, especially when he tosses his sword at Joffrey’s feet and says, “Here, boy! Melt it down and add it to the others!” It’s just a glimpse of his legendary skill and proof of how revered he is within the realm, especially since Tywin later tells Cersei that dismissing him was “as insulting as it was stupid” and Jaime also comments on his ability (in the books he does, anyway). I was so pleased to see him again in season 3, aiding everyone’s favorite many-titled Dragon Queen on her quest to reclaim Westeros, and was so bummed out by his early demise in season 5. I’m not even that mad that they killed him, because the semantics of it make sense; they had to make more room for Tyrion to squeeze into Dany’s retinue and they have to pare down the cast as the episodes dwindle. It’s how they did it that bugged me. His death was an attempt at shock factor over quality, though the few brief moments we got to see Ian McElhinney’s sword skills were pretty glorious. However, the way his death was handled is one of the few complaints I’ve had over the entire series run, but I am glad they did bring him back after his dismissal from the Kingsguard instead of axing his story-line entirely. 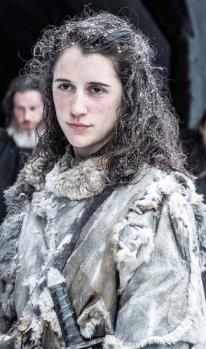 Meera Reed – Ellie Kendrick
Honestly, I don’t think Meera gets nearly enough credit for what she’s done thus far in the series. She’s a fighter, but she isn’t emotionless or fearless; she’s struggled, but it hasn’t defeated her and she’s persisted in spite of the obstacles. She’s killed a White Walker and fended off the army of the dead. She had to mercy-kill her own brother to end his suffering and so she could carry out what he wanted her to, she had to witness Hodor’s dramatic end, she’s had to drag Bran through the snow and away from wights on a sled all by herself (her calves must be amazing by now) and she’s dedicated literal years of her life and essentially put her life on hold to journey north and live in a cave so Bran can become the Three-Eyed Raven. I think her exhaustion in the season 7 opener was a testament to everything she’s endured thus far, and I’m excited to see what happens to Meera’s character this season and next. Of all the characters who legitimately deserve a happy ending, Meera is definitely near the top of that list, and I also hope we get to meet her father, Howland, sometime in the next two seasons.